Imagine setting up a drive all week long and the doom and gloom of it is that there will be a chance of rain. What to do…. call it off or chance it?  That is exactly what happened when Amer invited me to come out to one of his drives during mid May. You knew from the night before that it was gonna be a real toss up but when the time finally came…. oh it came down. 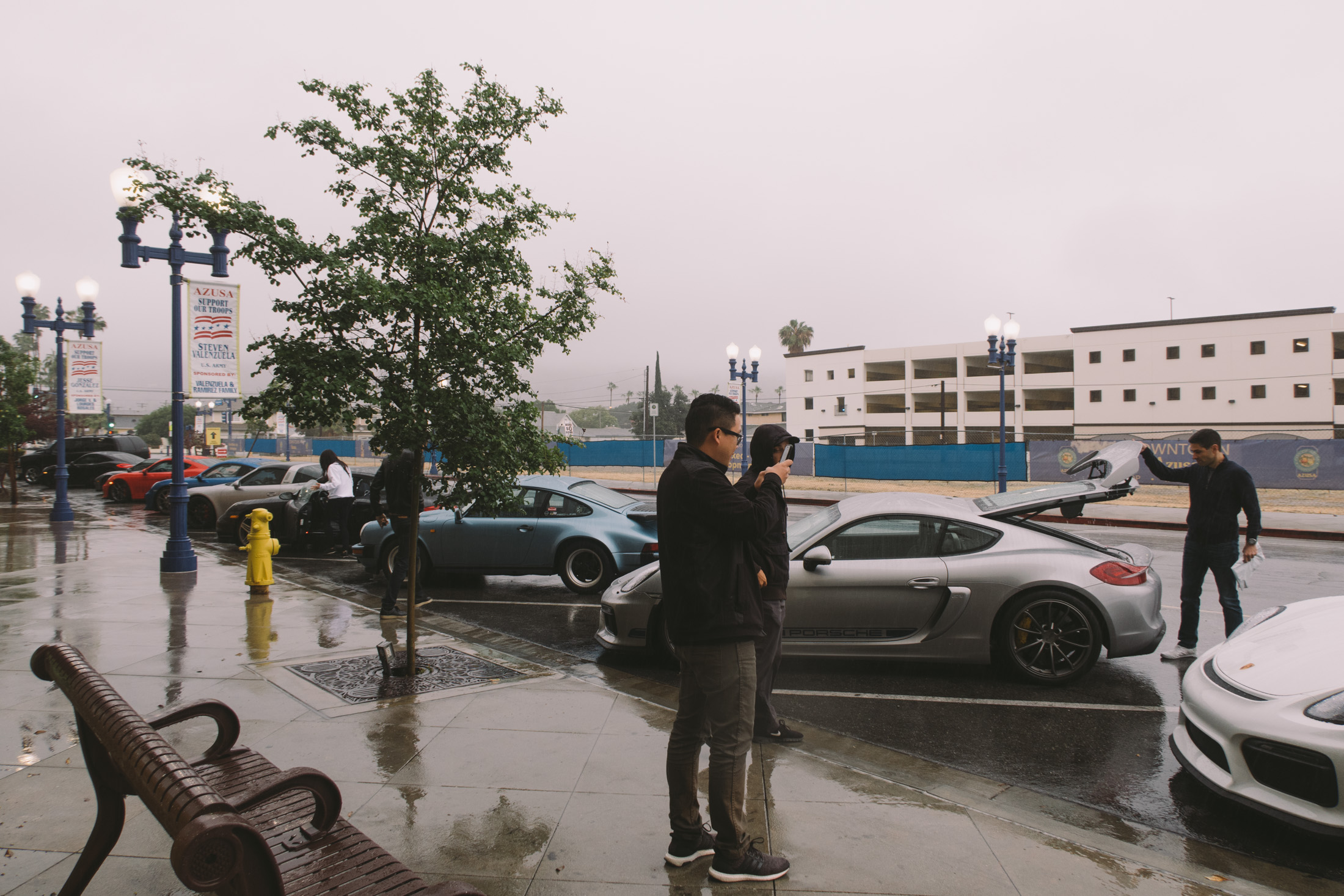 So I wake up around 5am and ask myself, “Is this really gonna go down or is Amer gonna call it off?”. I mean most wouldn’t do “spirited” runs in the rain let alone an entire pack of drivers but I wasn’t scared and I figured, what the hell…. lets see what happens. 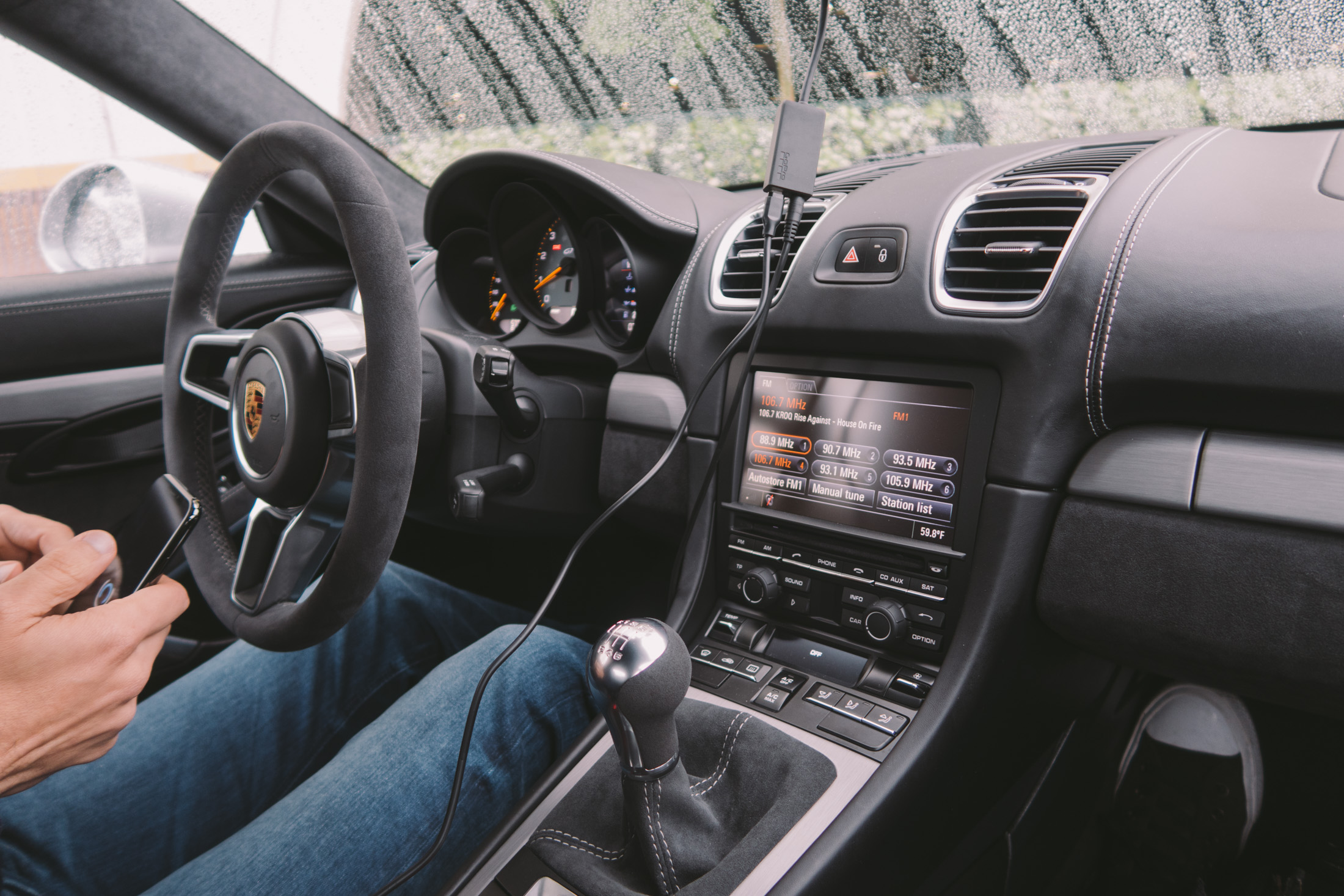 We all gathered at the Target parking garage off Azusa and one by one, everyone who committed actually showed up, minus two aircooled guys. That is respectable…. a group of people who said they would show up actually show up. No excuses on why they couldn’t make it or that the roads were wet. In fact, the group was excited and so was I. 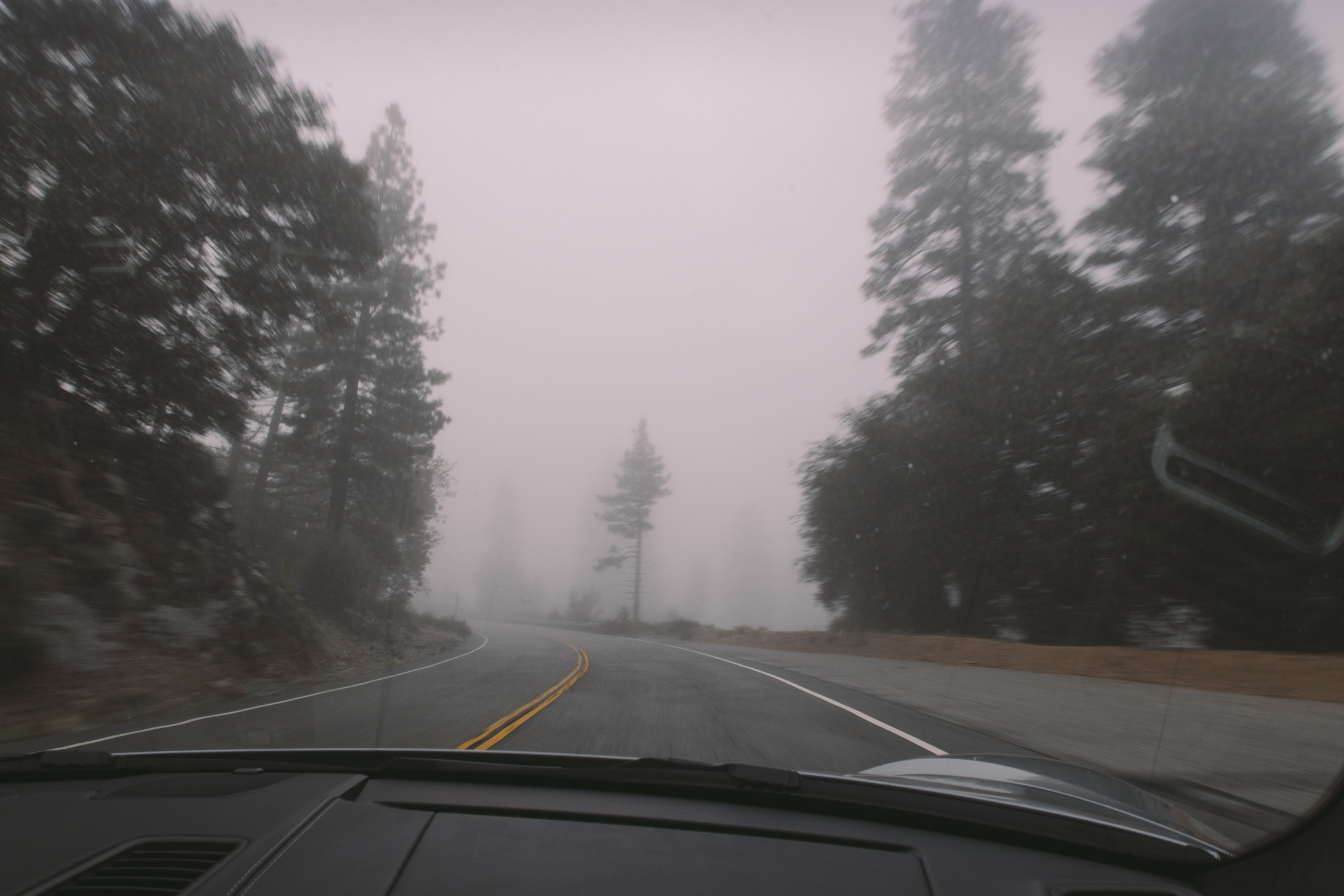 Now imagine showing up to a group where everyone knows each other and have known each other for a very long time. I feel like a freshman who transferred to a new high school from out of state with the exception of Joe who I met prior. He basically was like my 5th cousin, whom I met when I was in the 3rd grade so I have a slight “in” into the club lol.

Then the “X” factor is I have a Youtube channel and perhaps some of the guys/gals have seen it and maybe they don’t like me for whatever reason (my moles, my cars, my energy) and I have to make sure that I am not coming off abrasively to ensure a nice smooth day. However, they made everything very easy for me and the group dynamic was stellar! So thank you guys + Kyoko for making a freshman feel welcomed lol. 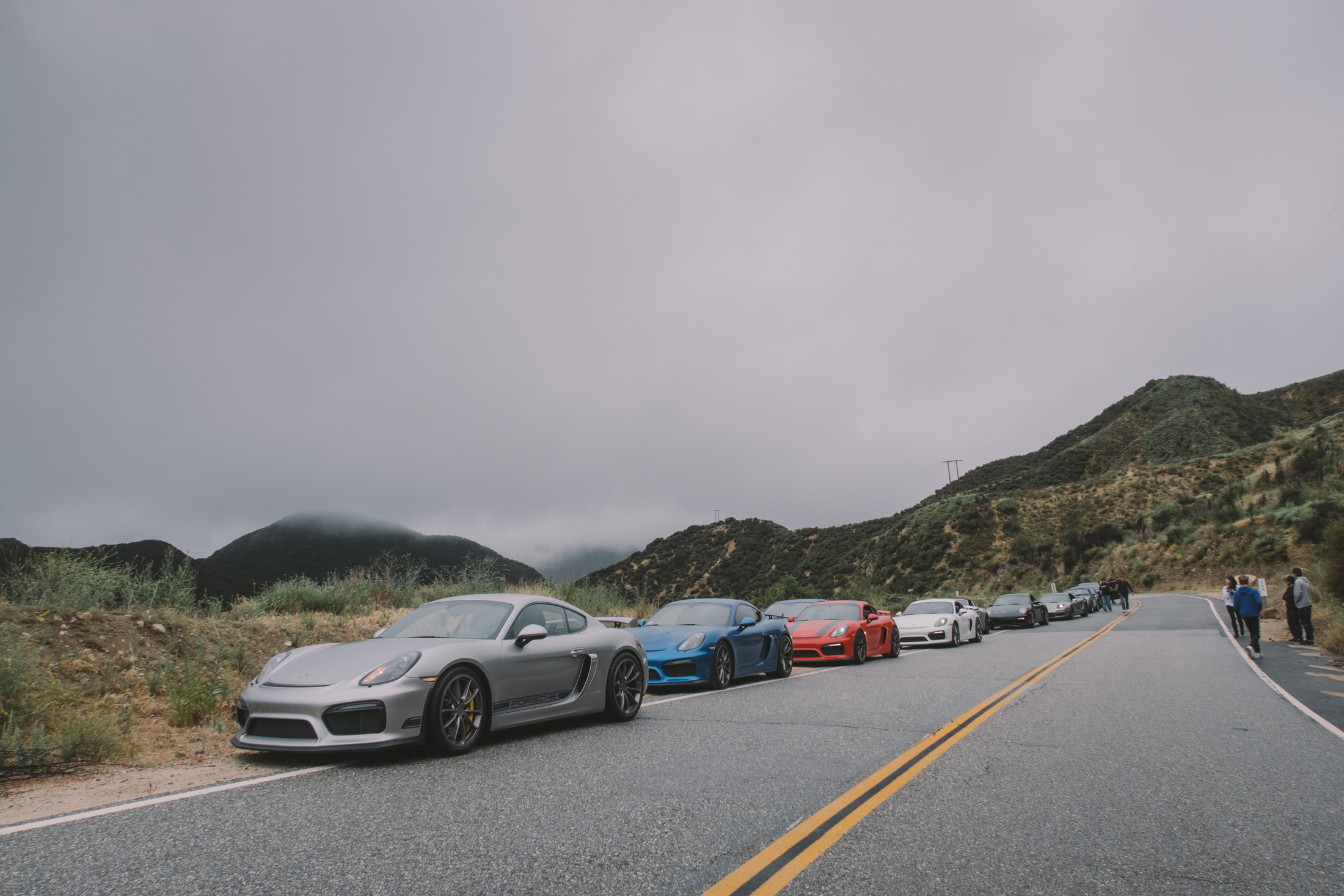 Now I decided to jump into Amer’s GT4 as I have never been in a moving one. First thing I notice is how contemporary it is and how close it resembles the 991 interior. The exhaust note on his GT4 is bombtastic and it has the right amount of rumble to it. Amer took it easy in the corners due to all of the rain but on the straights, he opened her up and let her loose! 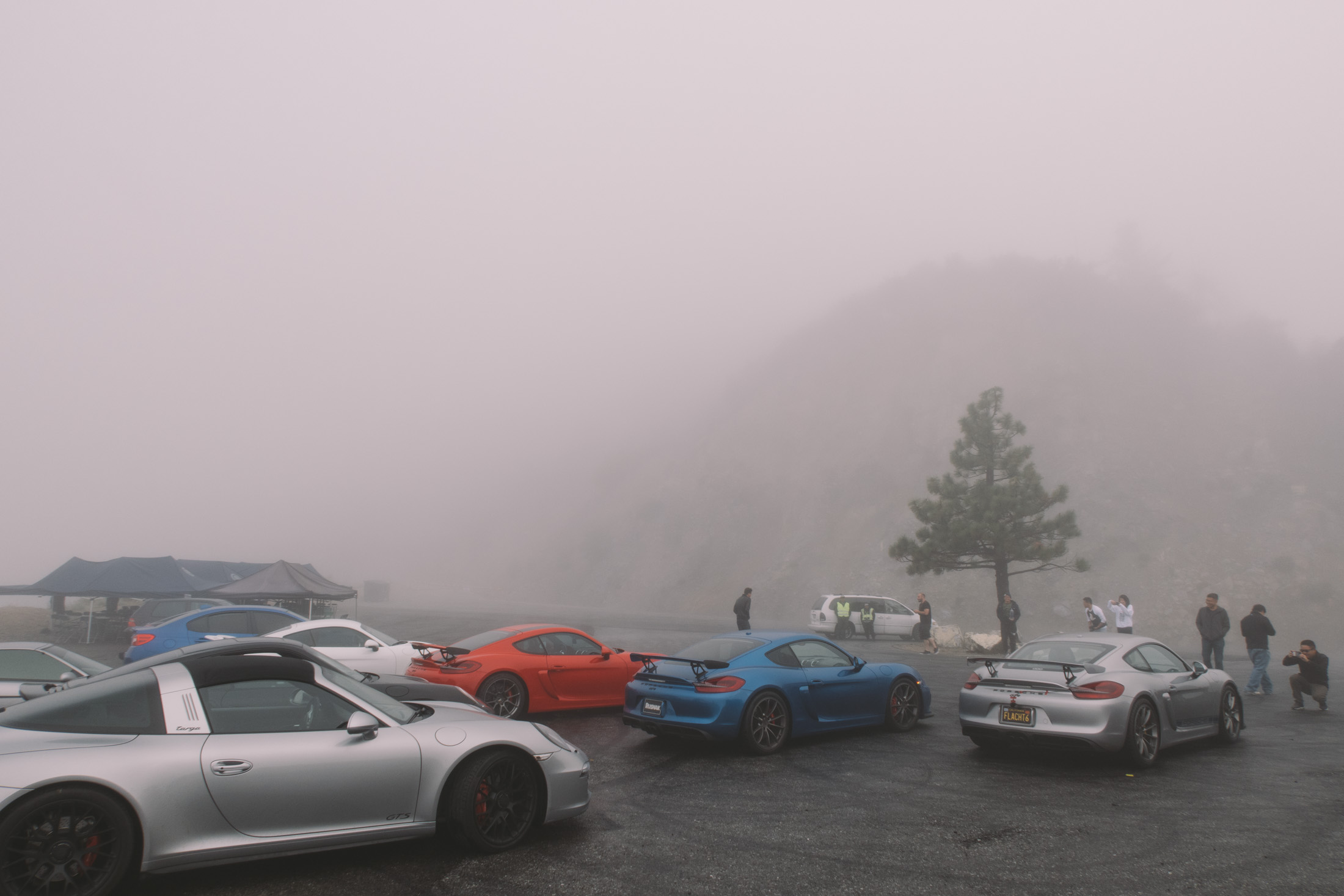 The 911’s were definitely outnumbered here as we had Kyoko’s 997TT and Joe’s 991 Targa in the sea of Caymans but it was a nice sampling of 911s nonetheless. I would love to sit in a 991 Targa with the top down one day. I think this is the best looking targa that Porsche has ever built. Don’t you think so? 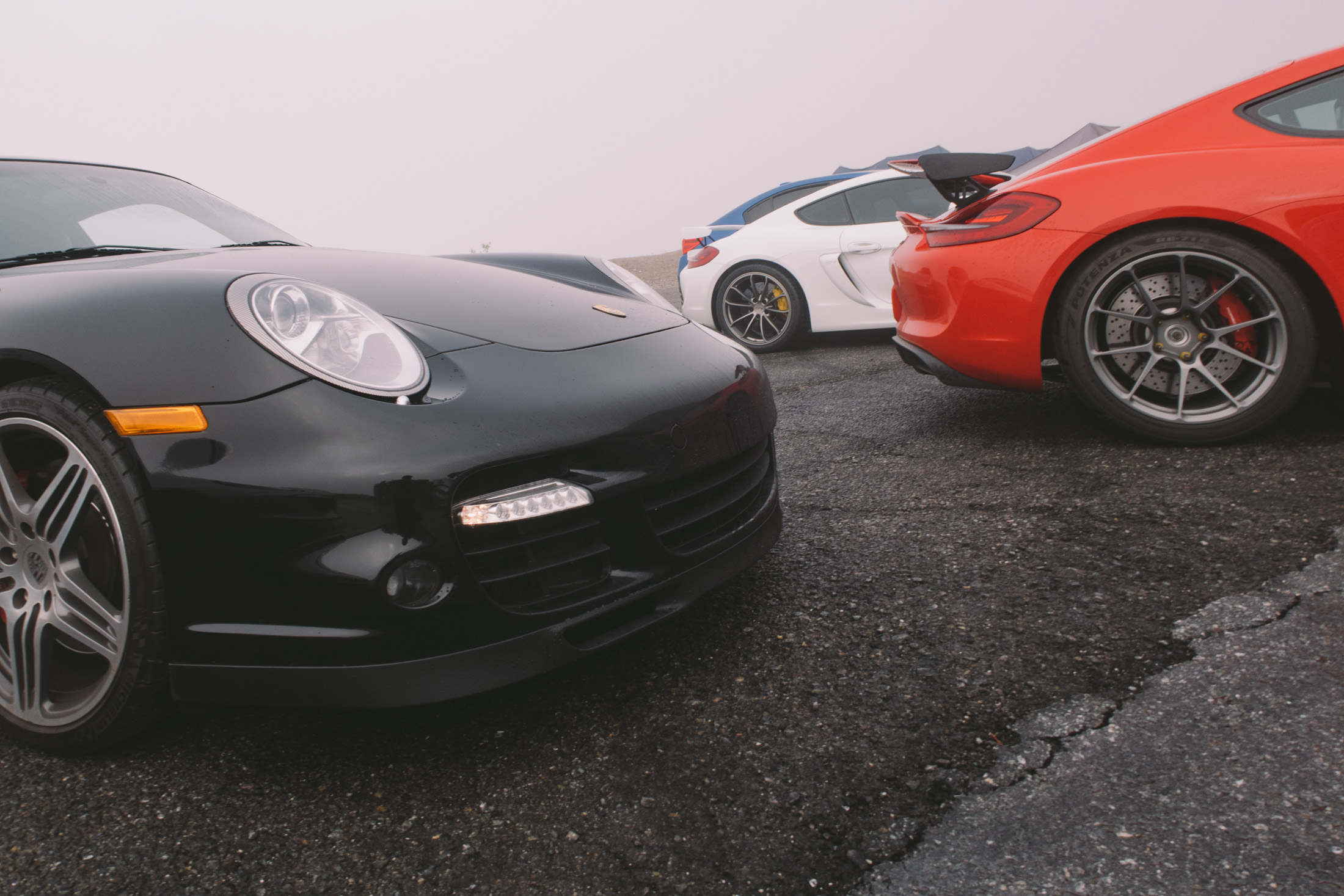 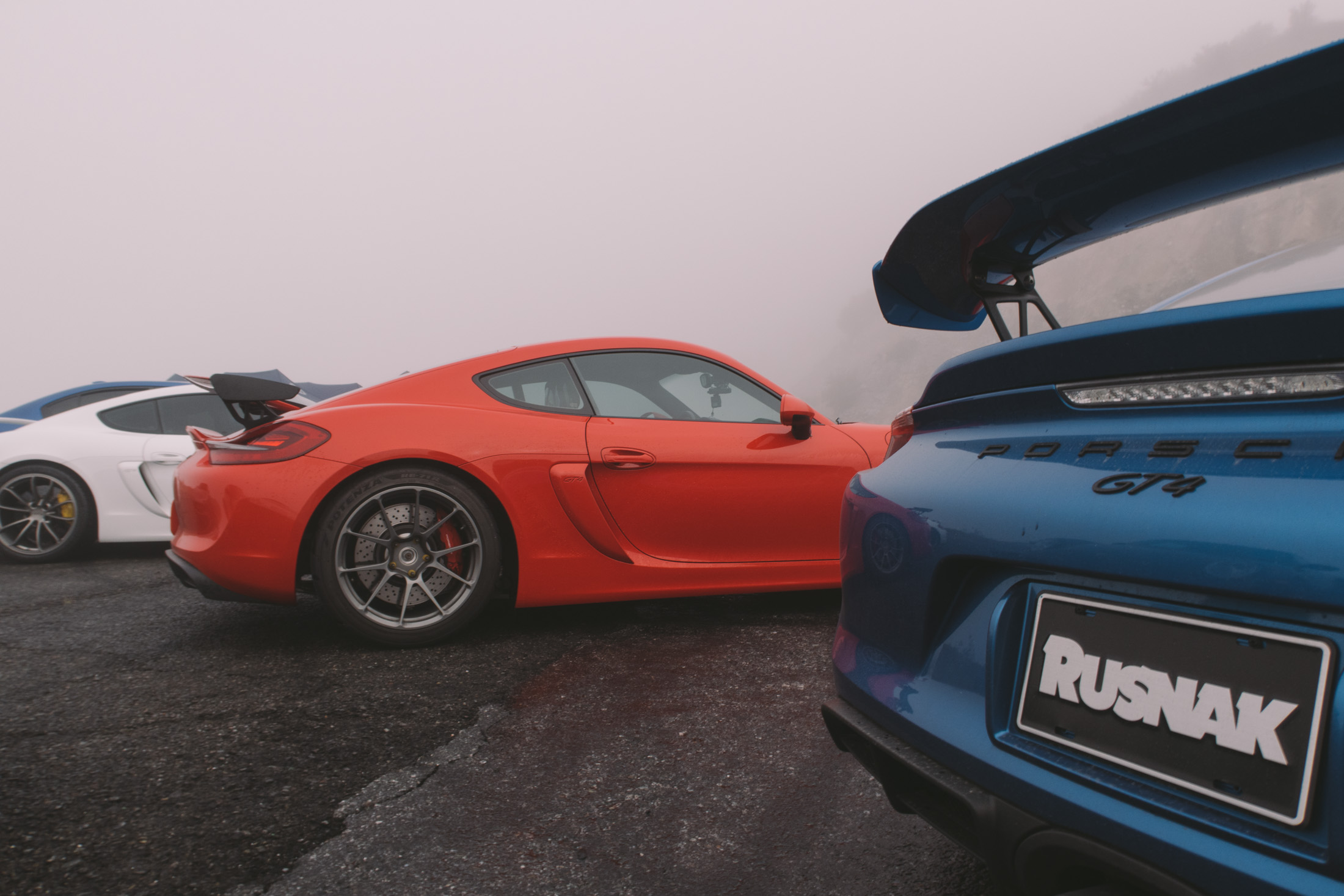 GT4’s had a very patriotic theme and I guess if you include Amer’s silver into the mix, it would basically be an ad for the New England Patriots. (Go Cowboys! ;0) ). As you can hear in the video, the sounds of these GT4’s are top notch. Very mean! 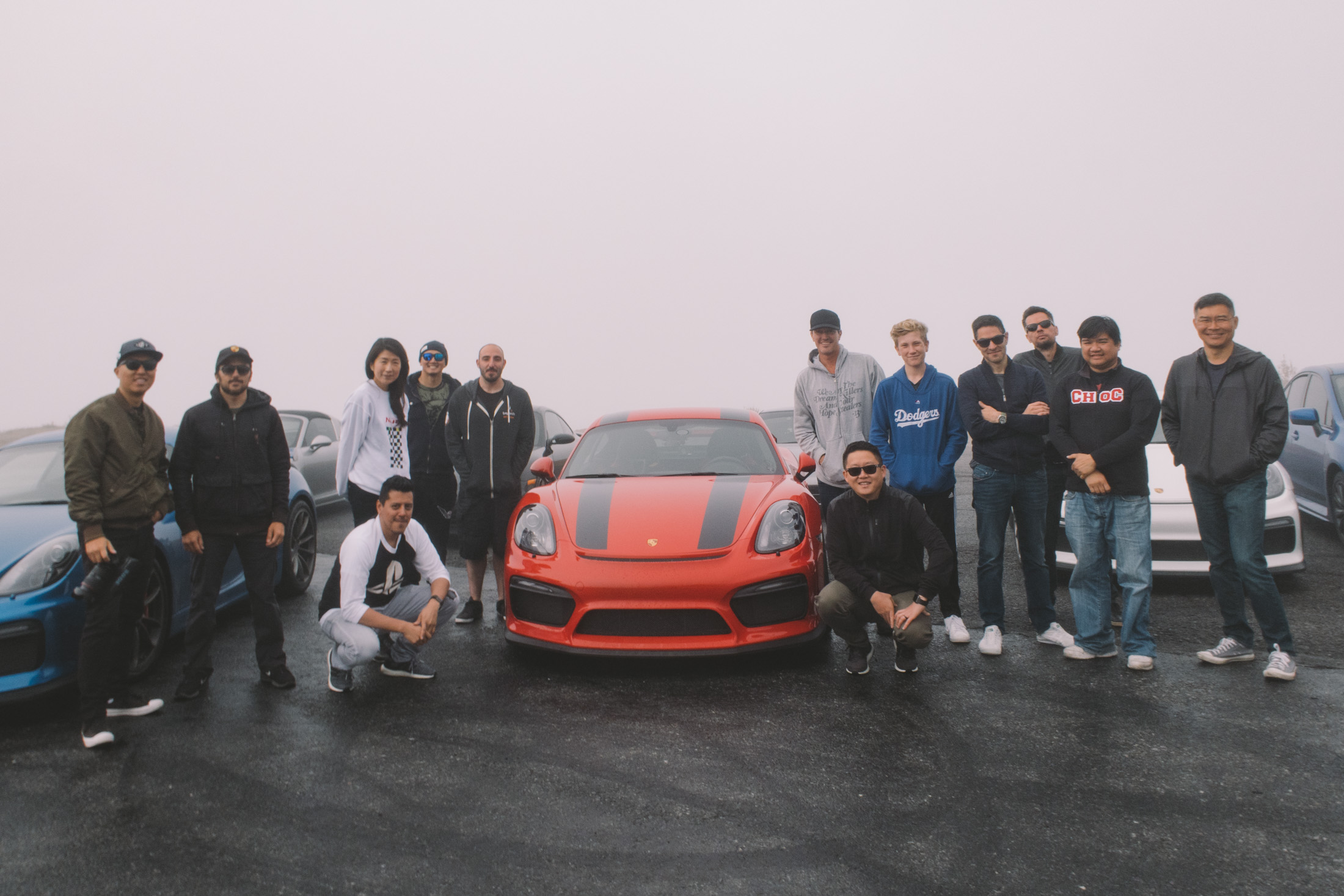 Now you would think getting a group photo would be as simple as pressing a button right? But no, things are not as they seem. First off, I handed my camera to the security guard and he seemed like he did a good job until I checked the photo. He was so far off and the photo was super crooked. So I had him take it again and even with direction, he botched it up. So the end result is me having to crop in lol. 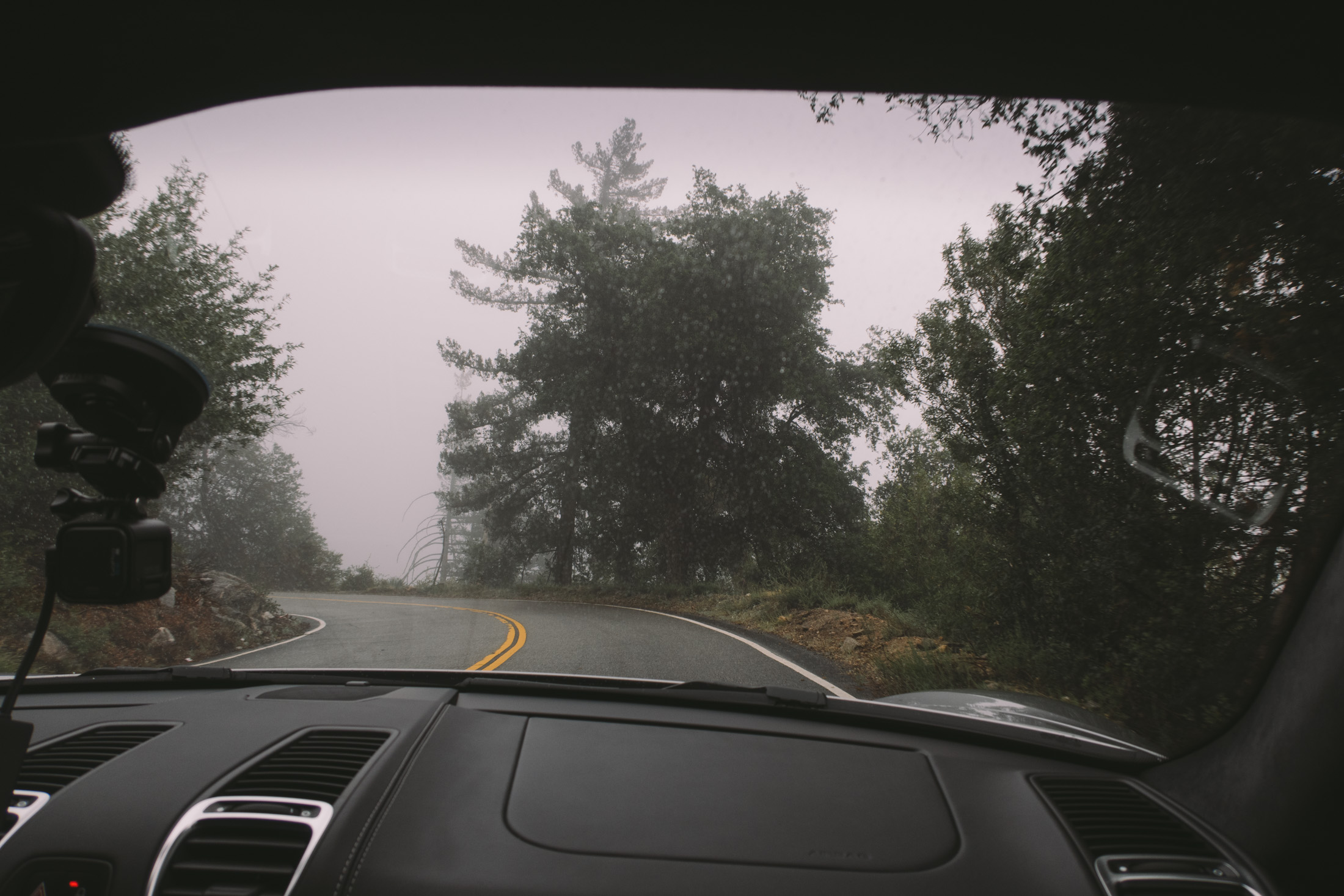 We soon headed to breakfast at Crystal Lake Cafe where Amer was feeling generous and treated the whole pack! Thank you for the meal sir! We enjoyed the morning air and then decided to head back down taking the East Fork to GMR. This is where things got a bit rocky as the super tight curvy roads started to make me feel car sick. I couldn’t hold a camera let alone my head up as I wanted to vomit all over the place. Luckily after a good 40 mins, we made it down with no incident.

What a morning it was! I had a great time meeting all the awesome folks in the group and hope to do another run with you guys in the near future. You guys are an active group so I will try to plug along when I can but thank you for being so generous with your offerings. You sure know how to make a guy feel welcomed.

Until the next time folks, thanks for following along!
Drew

Check out the merchandise and rep your favorite 911 brand!
http://shop.911cooled.com