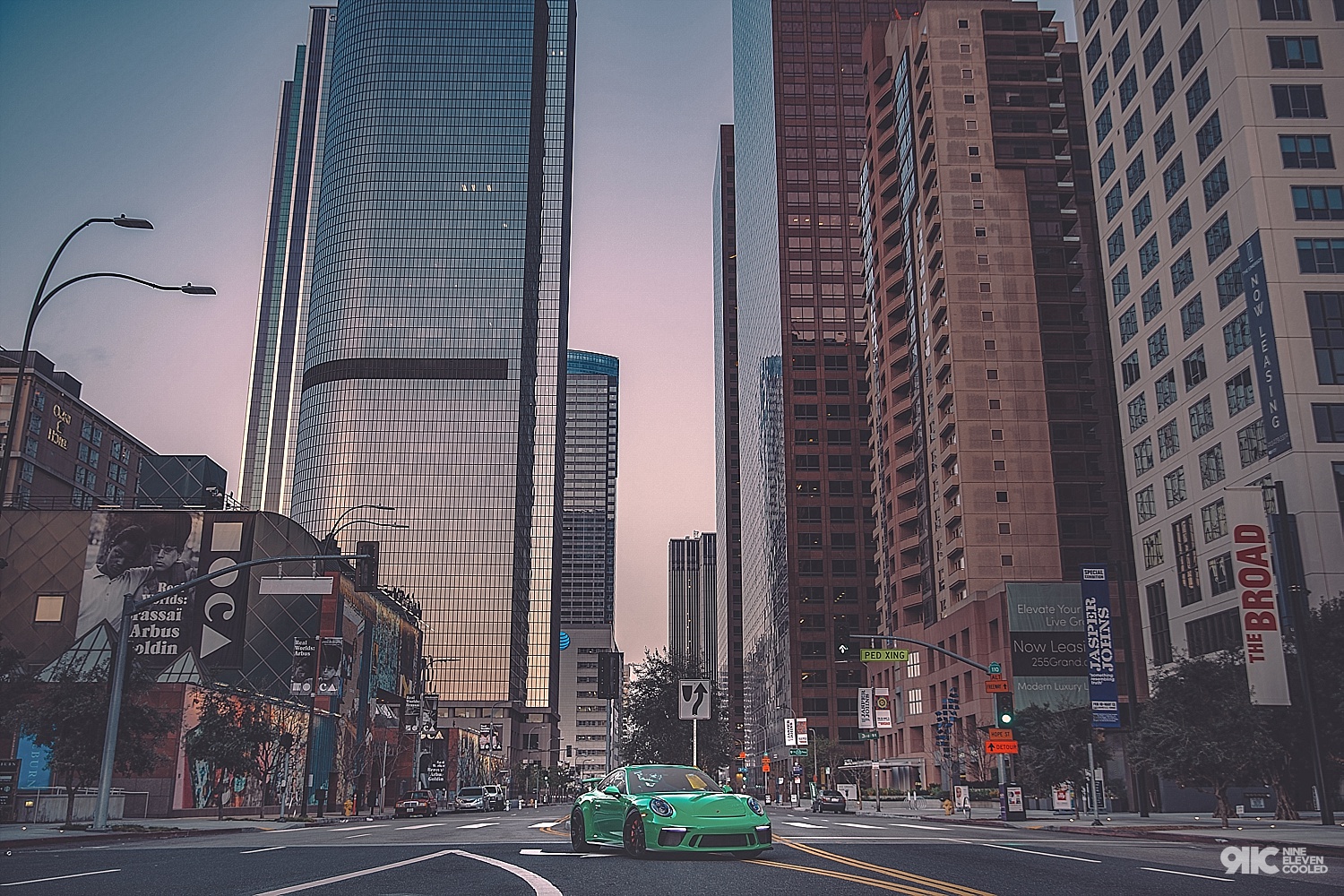 It’s not every day that a buddy calls you and says, “Come meet up with me and photograph my car. I’m gonna be shooting my friend doing yoga stuff and you can drive the GT3 and shoot it” and my immediate answer is, Of course! Just give me a time and place… and with that, we met on an early Saturday morning in Lower Grand just past 5:30am before most of the city was up. Once we met up with Verone, he handed me the keys and we split ways. Both Denis and I got into the GT3 and went up on Grand Ave because we knew that there was no one around at this hour. 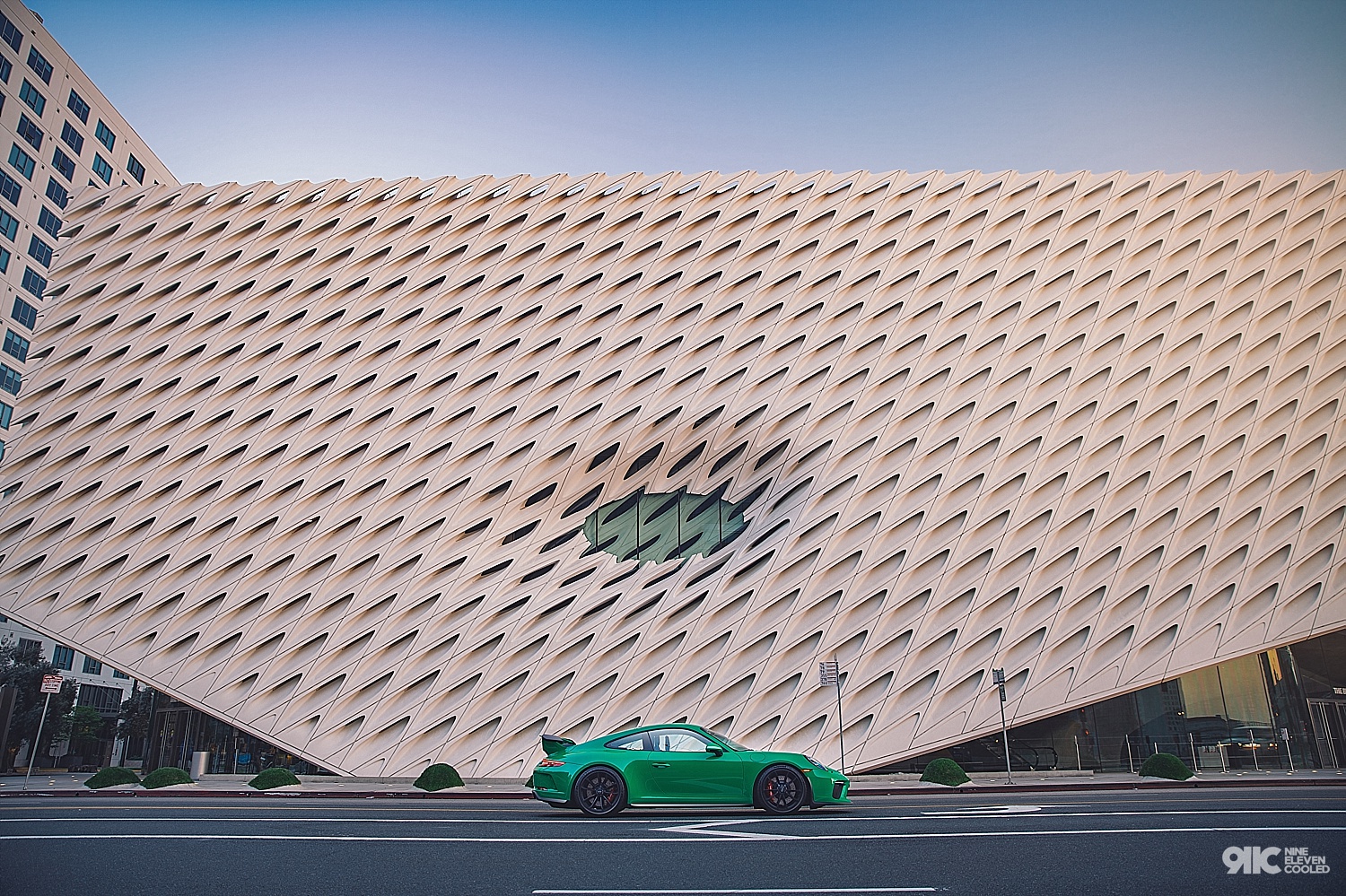 Now that The Broad has become such a landmark in Down Town, we figured it would be a good place to start. Normally this area is packed with tourists from all over the world but at this hour, it was a ghost town. Hence why I love shooting this early on, no one to bother me and the images come out that much cleaner. 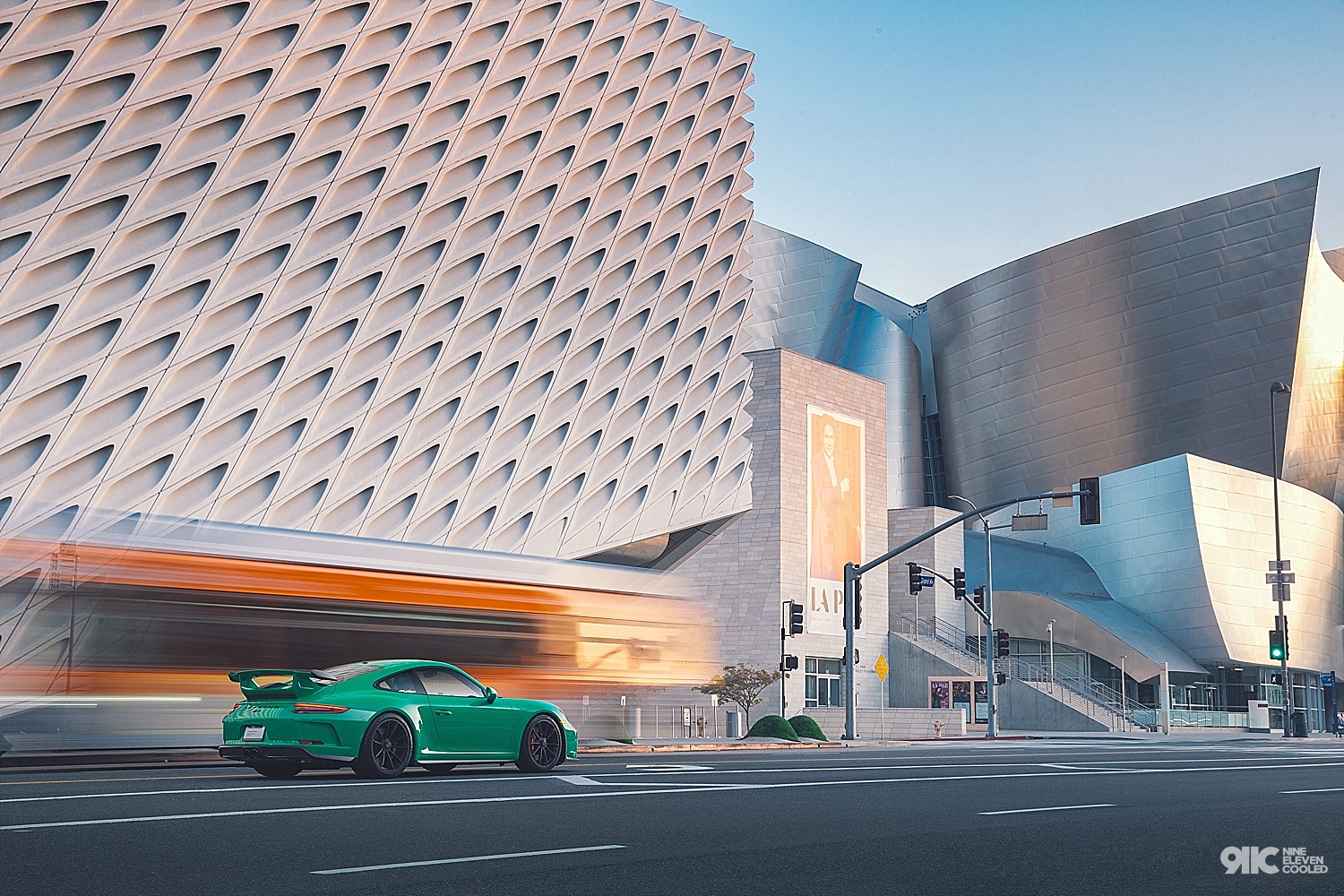 Now when Verone handed me the keys, he had only 70 miles on his car! Barely broken in… so you can imagine how nervous I was driving his baby frog around downtown. I have to say that the car was quite easy to drive… the refinement in the GT3 is substantial to the 997 but I didnt take it above 3.5k rpm so who knows what happens above 4k where GT3’s typically come alive.

Timing is everything in photography and in hoping to hone my craft more, I have been trying to be more sensitive to the environment around me. Even in the early hours, there were buses flying by every 3-4 mins. I wanted to get a sense of movement even though the car was sitting still. I love the way the sunrise hits the back part of the buss. Those little splashes of colors means everything to me! 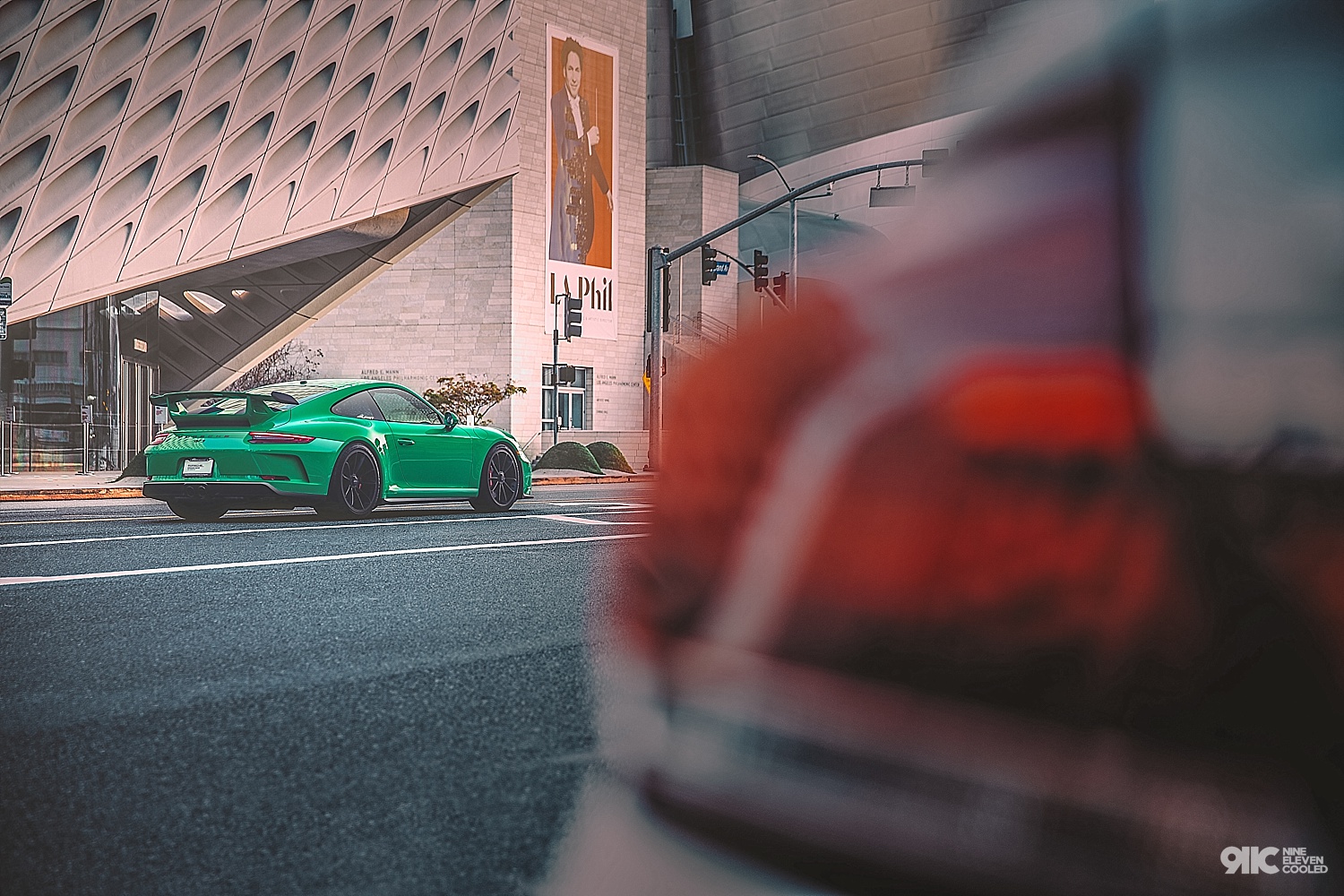 Since I could not get this Civic to move, I just used it as a prop in the foreground. Sure it takes up 40% of the image but somehow it works for me. Not a killer shot but one to add to the overall feels of the shoot that day.  Boy do I wish I had another 911 in that foreground but life is hard! 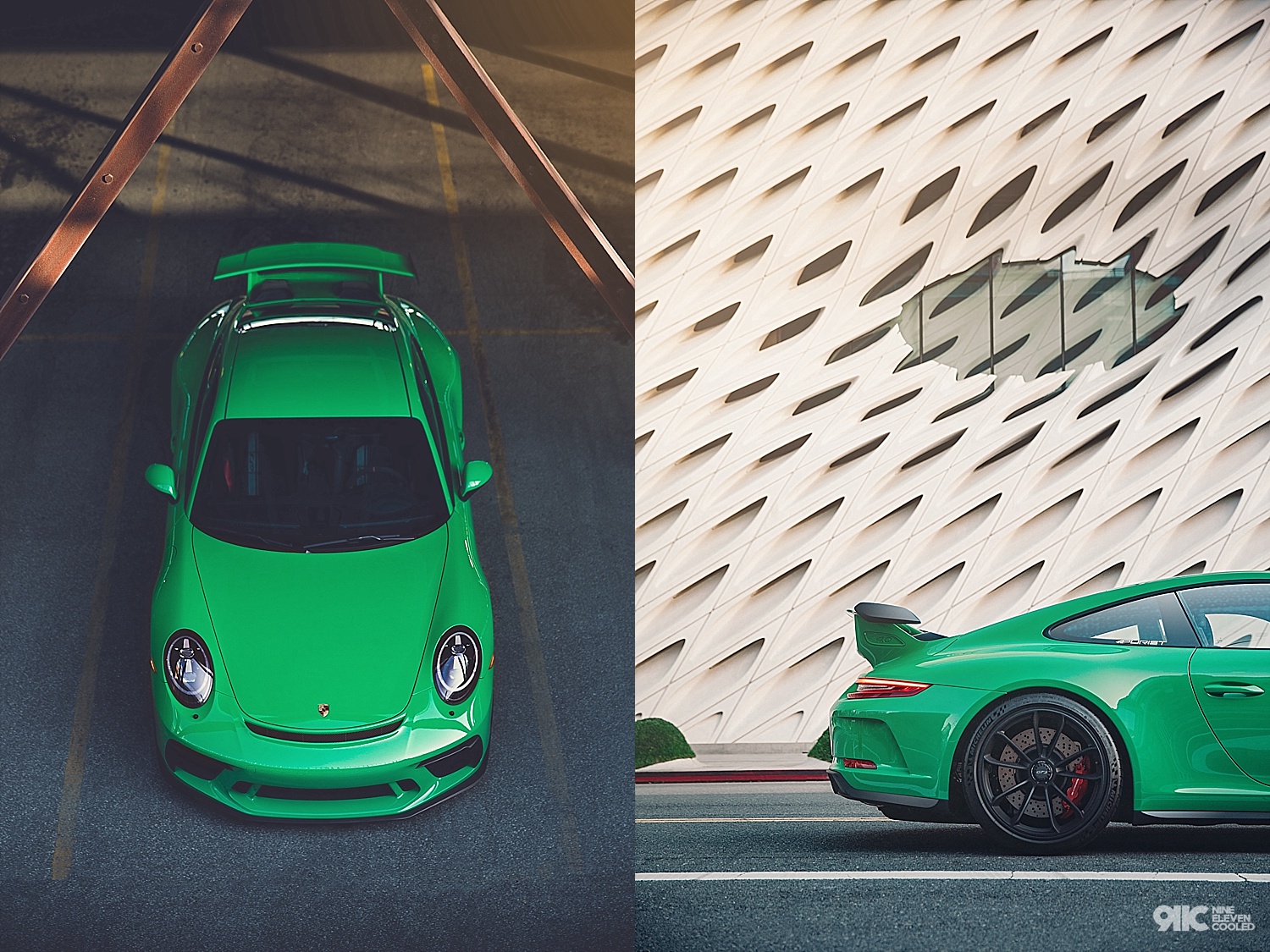 As we transitioned to our next location, the parking structure across the Disney Concert Hall is always a great spot to shoot as it is laced with textures. Plus being multi level, it has almost everything you need for it to be a photographer’s playground. Since it was early, the angle of the light was awesome for creating moody portraits.

I was excited when we set up the symmetry shot above (left) but when you are trying to setup a perfect symmetrical shot, it takes a lot of work in post because things never line up the way you want. Partly due to the bars not being lined up with the yellow paint but add on top perspective of focal length and such… its never really that easy.  I am happy with the outcome but it did take some effort as I had to photoshop the bars to be more in line with the overall composition. 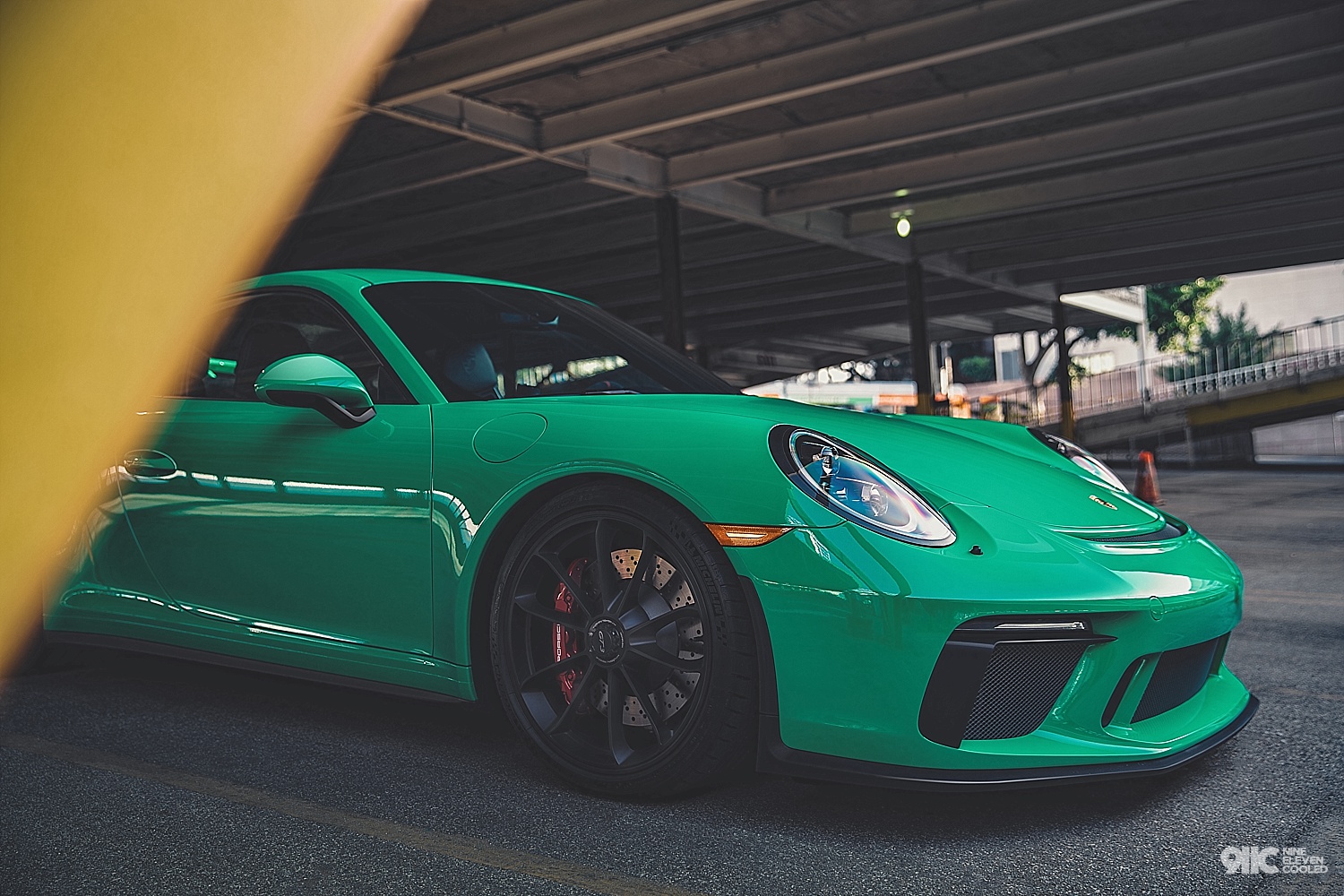 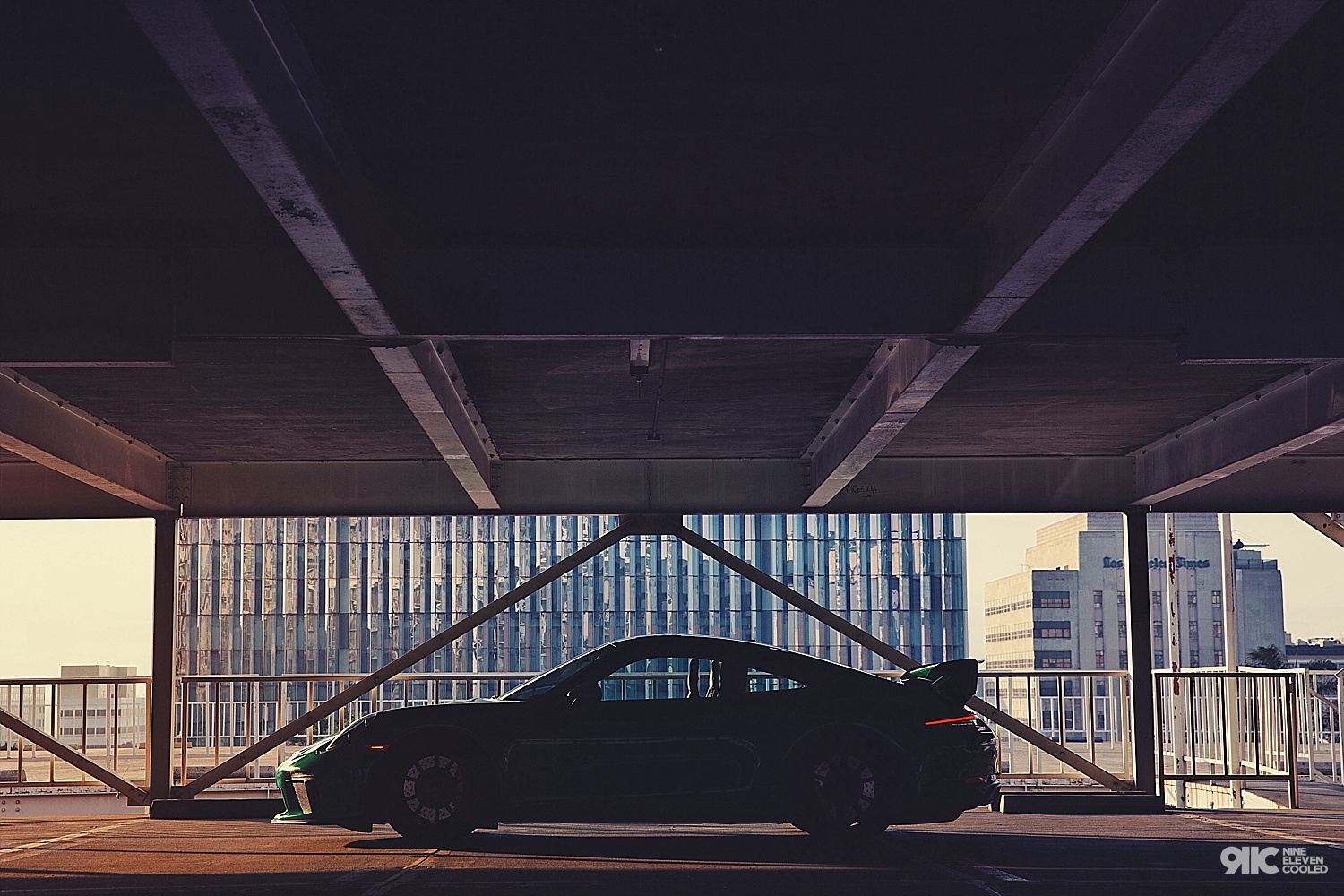 Not very often do I shoot silhouettes but in this case, the difference in the light between the buildings and the shadows in the parking garage was more than 5 stops. Instead of trying to spend an hour trying to do a nice HDR, I just kept it more organic and I like the way it turned out. Has the feeling of late afternoon doesn’t it? 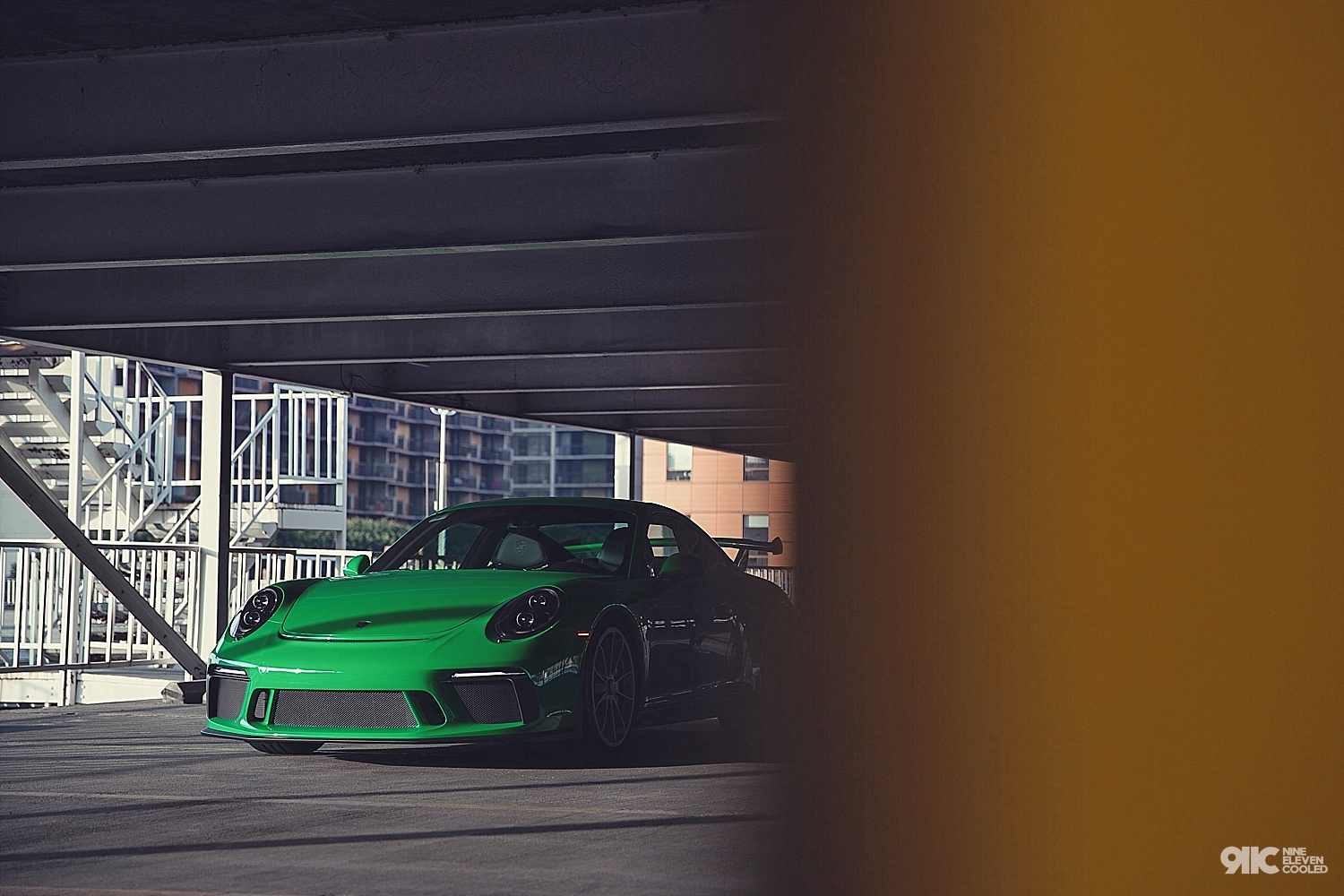 I have been learning to play with shadows more. They add dimensions to a shot and overall create that mood that normally is not seen with images that are lit perfectly. A 911 is beautiful no matter where it is located but it is up to the photographer to capture it in a way that tells the story behind the story. This GT3 has not lived its life yet but I know it will be filled with many great memories as Verone is very active in many aspects in the automotive lifestyle. What does the GT3 say in the image above? 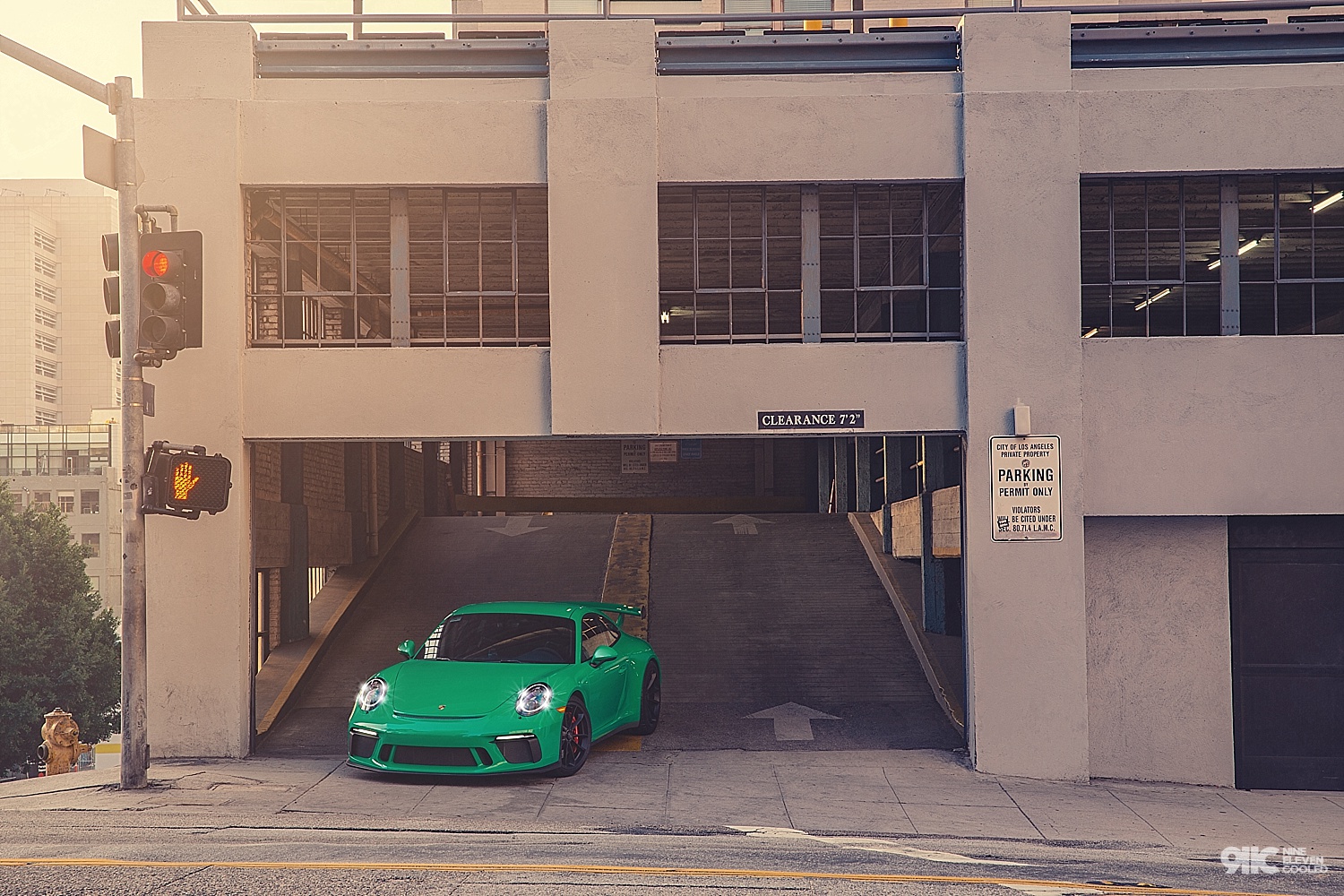 I’ve always told my wife that I wanted to do a shoot in the exit of this parking structure. I just like the feels of this garage… the way the cars lead into a very busy street and even though we did get kicked out of here by security, he wasn’t fast enough as I already snapped the shot I wanted. It would of been nice to have a driver inside the car but I realize that I can’t focus all my attention on things that are out of hands. I am happy with the shot that I envisioned for so long! I did get a shot of a construction guy walking past with his neck broken looking back at the GT3 but it was during a bracket shot and it was so underexposed that it didn’t add much value at that point. 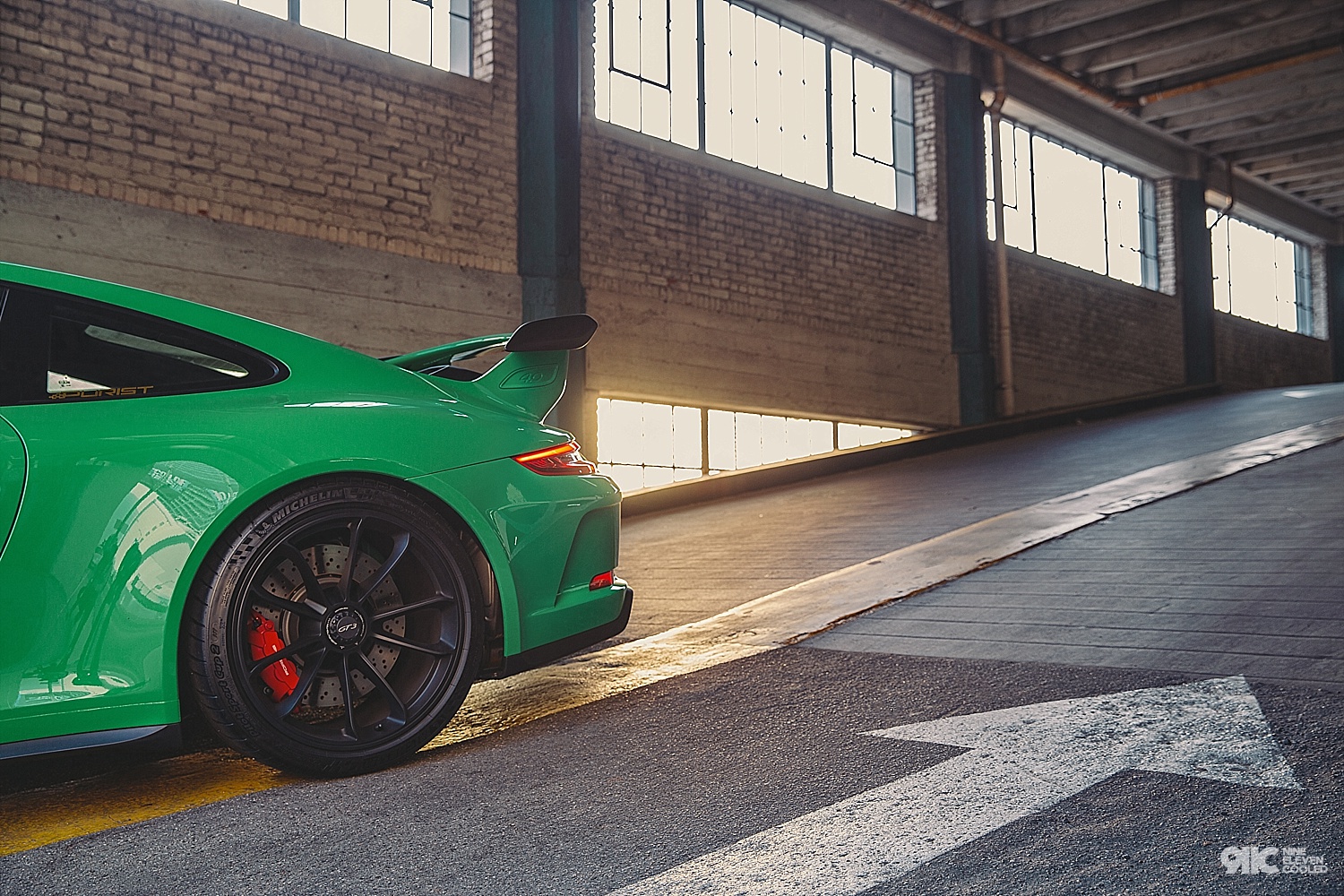 Look at the morning light peeping all its glory thru the glass…. always the little things that add to the greater dimensions of the photo. Like that big white arrow leading up to the upper level of the garage. The details that tell the bigger story… 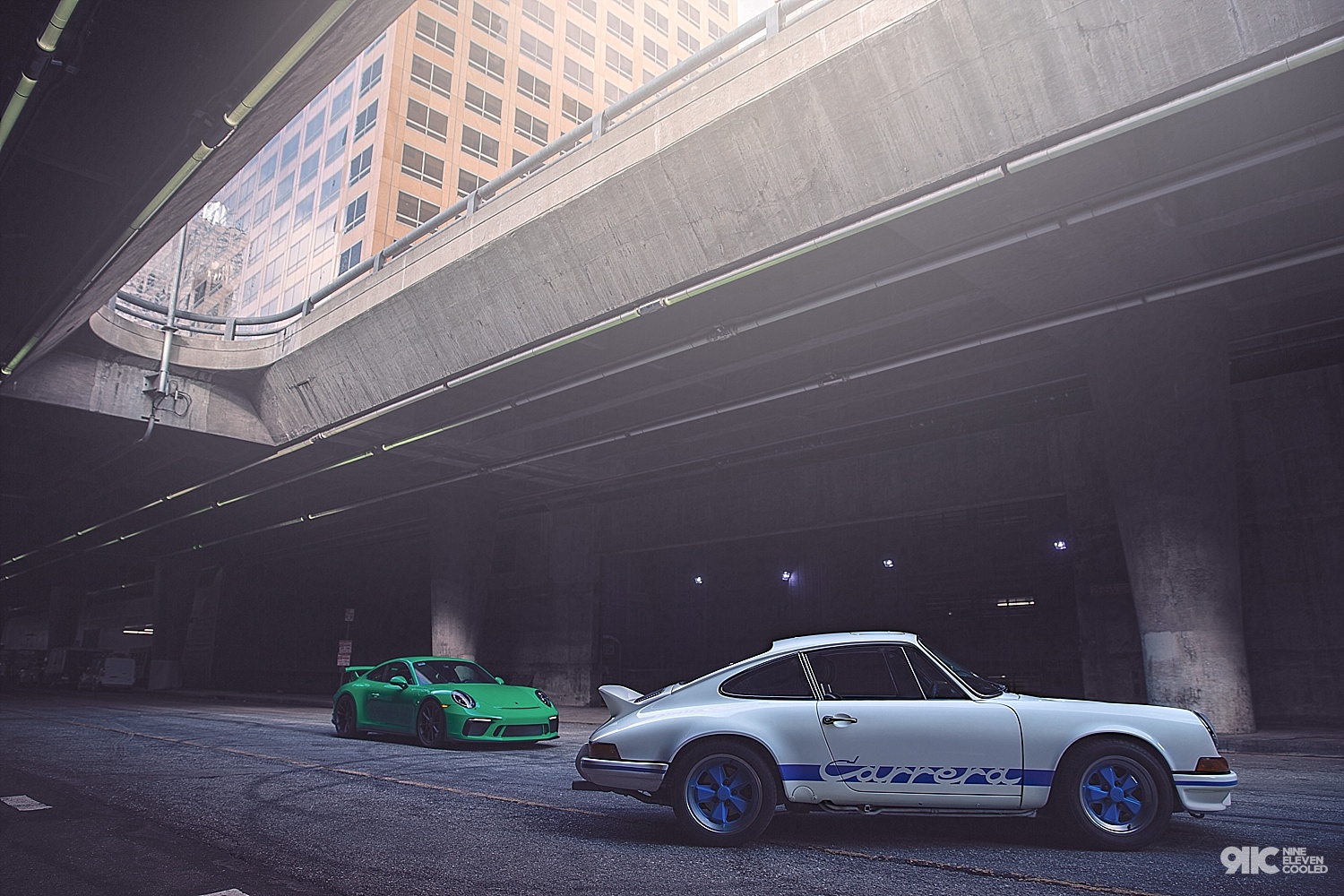 As we started to finish up our morning by 8:15am, we headed back to Lower Grand where we were pleasantly surprised by Adam and Alvin who happened to be shooting his new G50 G Body backdate that he just finished up after spending nights and weekends on it for the past 3 years. Outside of the interior and paint, he worked on everything else himself. As any proud father would be, he was so happy to show her off and we were so happy to hear it. Be patient as I will be shooting this RS feature in the future. 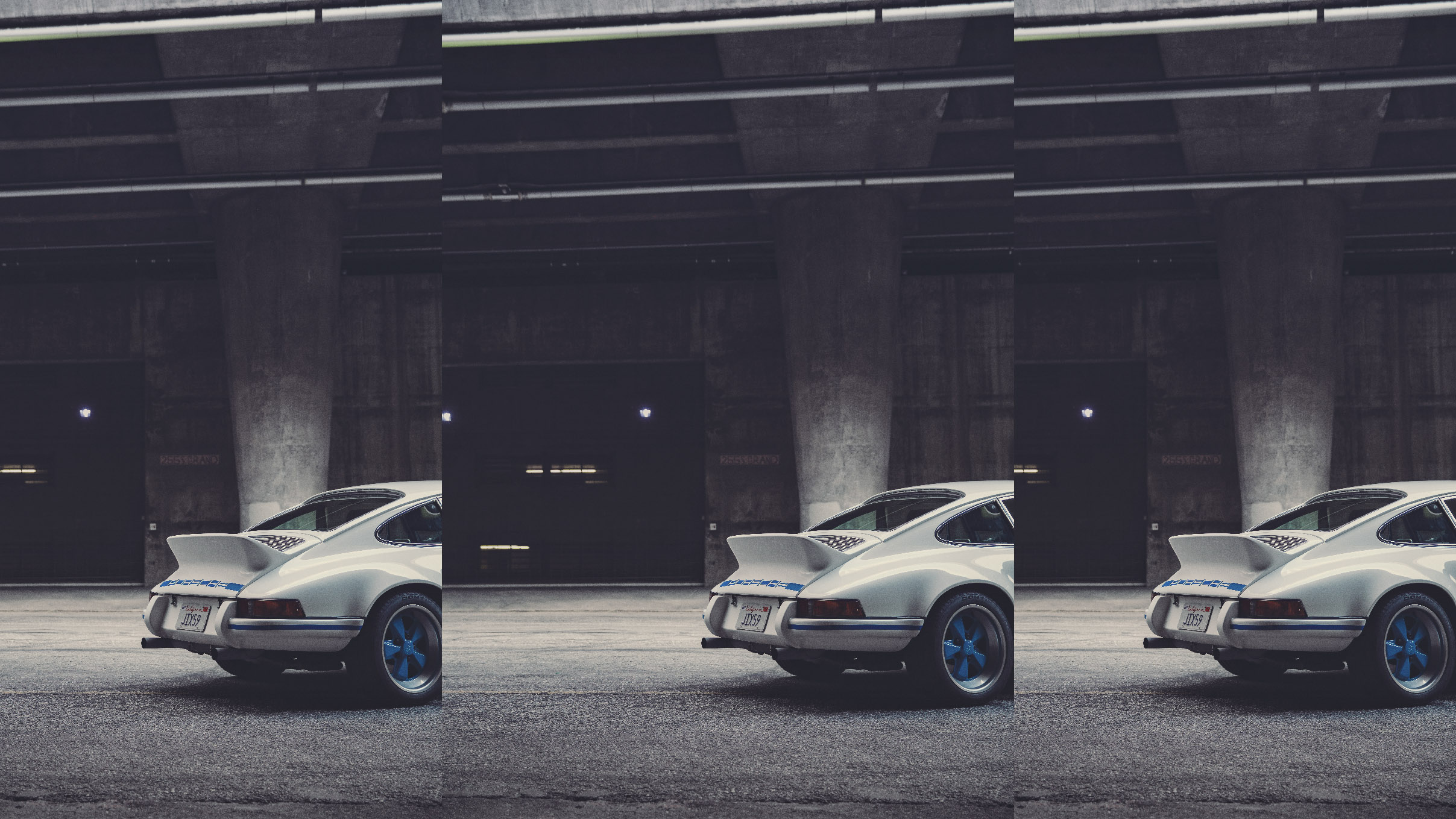 Thank you guys for following along this little adventure. I had a blast and I learned a lot about focusing my energy and building a style that I will be happy to display in a photo book sometime next year.

If you guys love what is happening with 911cooled and want to help support it, please check out the shop at http://shop.911cooled.com for very cool merchandise and posters of the shoot can be purchased there as well! Here is a direct link to the posters: https://shop.911cooled.com/collections/poster/Poster

Thank you to Verone for letting me drive your new baby around and thanks to Denis for the assist.