Verone picking up his 991.2 PTS Signal Green at PECLA

It’s not every day that you get to be invited to witness a friend move up in life… and when they do, you would want it to be as a wonderful moment as this one was today at Porsche Experience Center Los Angeles (PECLA). All of this started last month when my good buddy Verone asked me if I wanted to come to PECLA when his car was getting delivered. He said, “I think it will be come good content, what do you think?”. 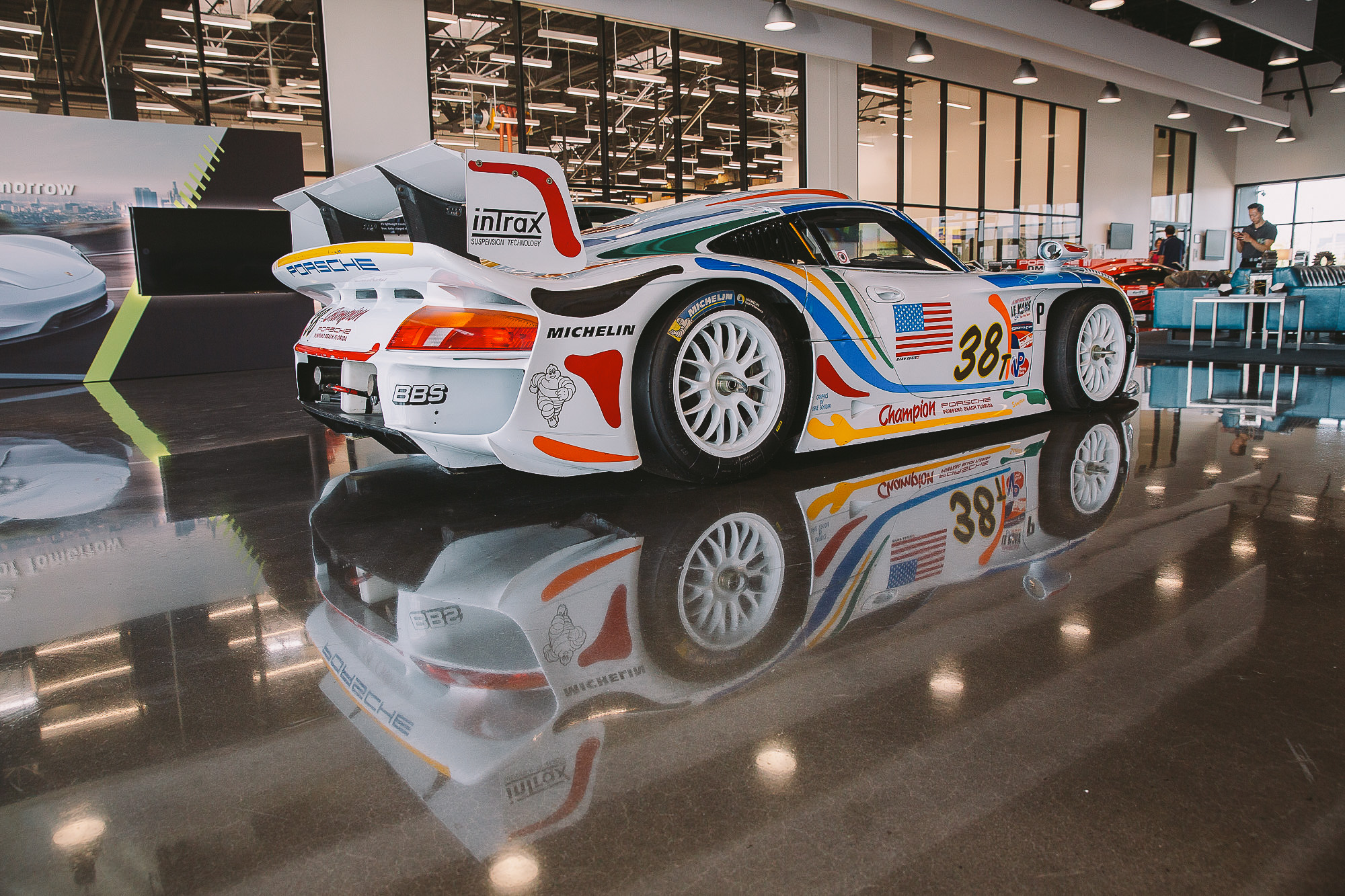 All I could do was smile over the phone as I knew that it would be an epic day. “Yea sure, I would LOVE TO BE THERE BRO!” as I screamed out in glee lol. Verone didn’t have an exact date as things were still being determined but it was going to be in April said Verone. However it wasn’t until I got the call from him on a Tuesday that I knew things were gonna go down the next day! 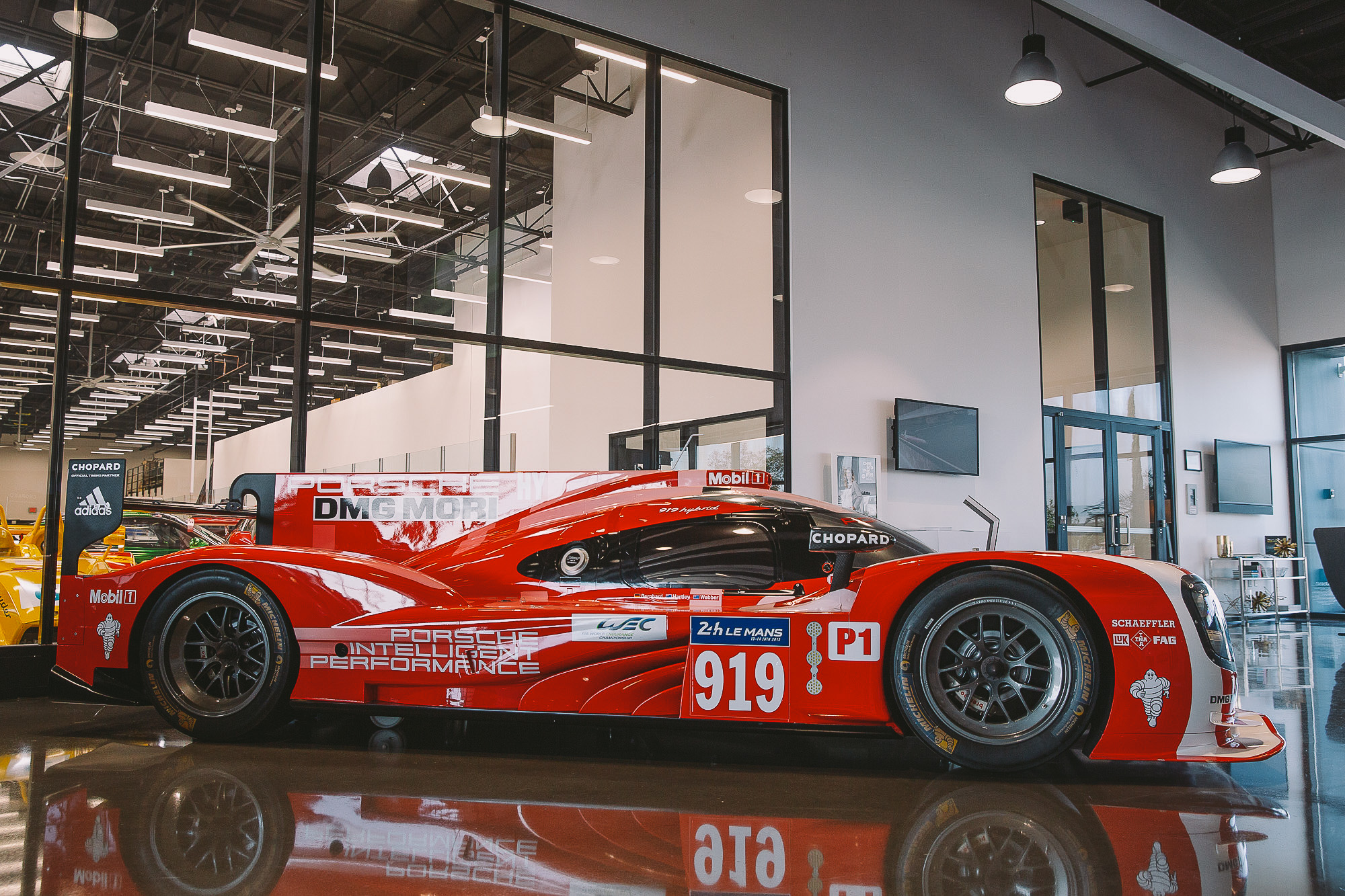 Of course a one day notice is gonna be short notice for many but for me, I just had to make a few calls so getting to Carson at 10am wasn’t an issue. As of lately, my wife Methuselah (@911_lovegrey)has started shooting with me as I have been short handed on many of the things I cover. Having her help has been great but also because she is just starting off, I have to devote some time to get her up to speed. All of these shots on this blog are from her… she did great but there is still a lot to learn. Many fundamental mistakes happened but we are working on that so the next time we cover, she should be that much better. 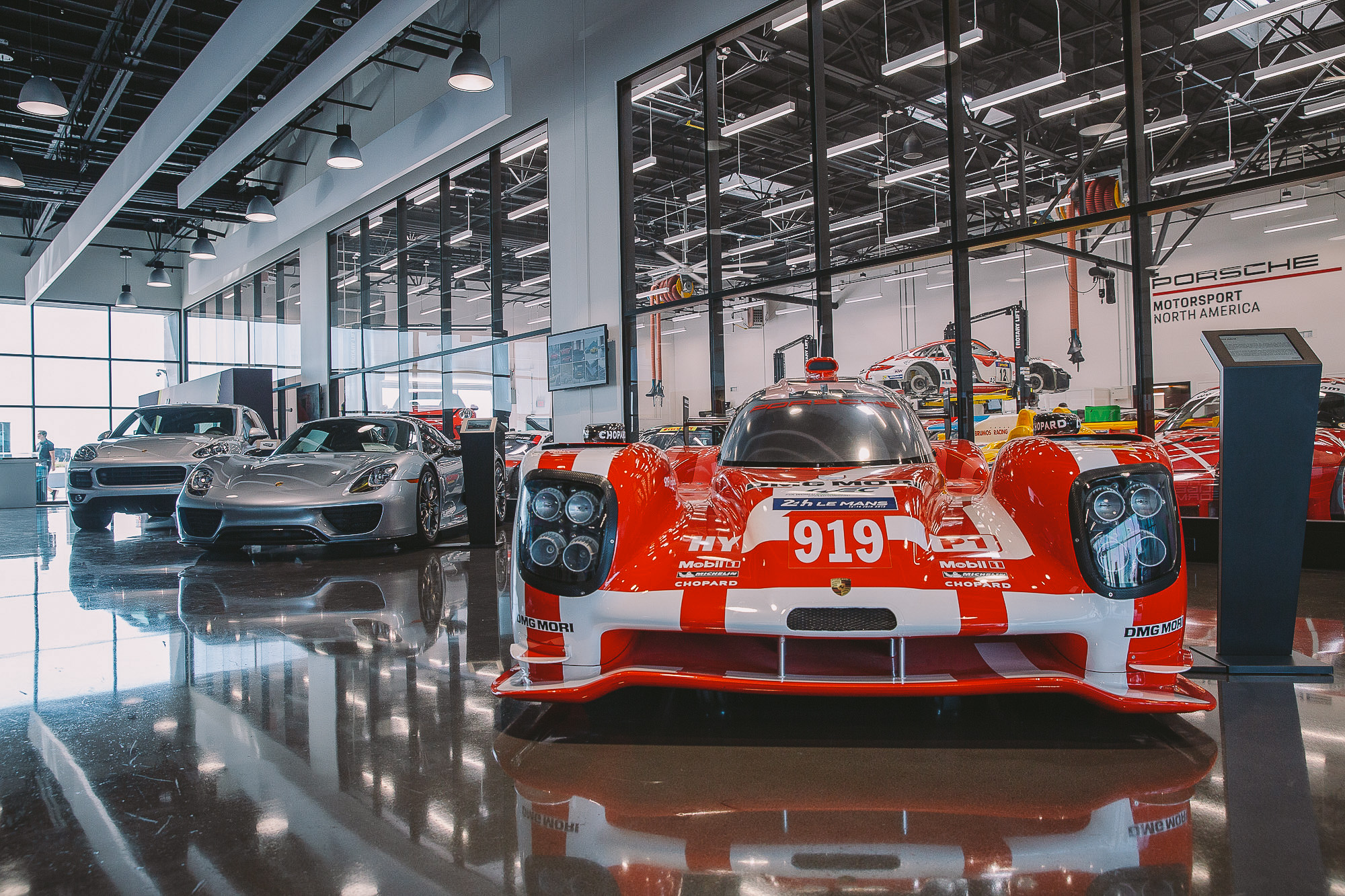 PECLA is such a wonderful experience as many of you have already been able to witness. Many of you consider this the real Disneyland and if they only had an annual pass to beat up on some new GT3’s, I am sure there would be a huge line of guys and girls eager to sign up. To witness great Porsche history as soon as you walk in the doors is always a treat, especially this new 919 that has been killing it on the tracks this year. That new hybrid tech isn’t playing around much and the slick 918 next to it with technology derived probably straight from the 919. 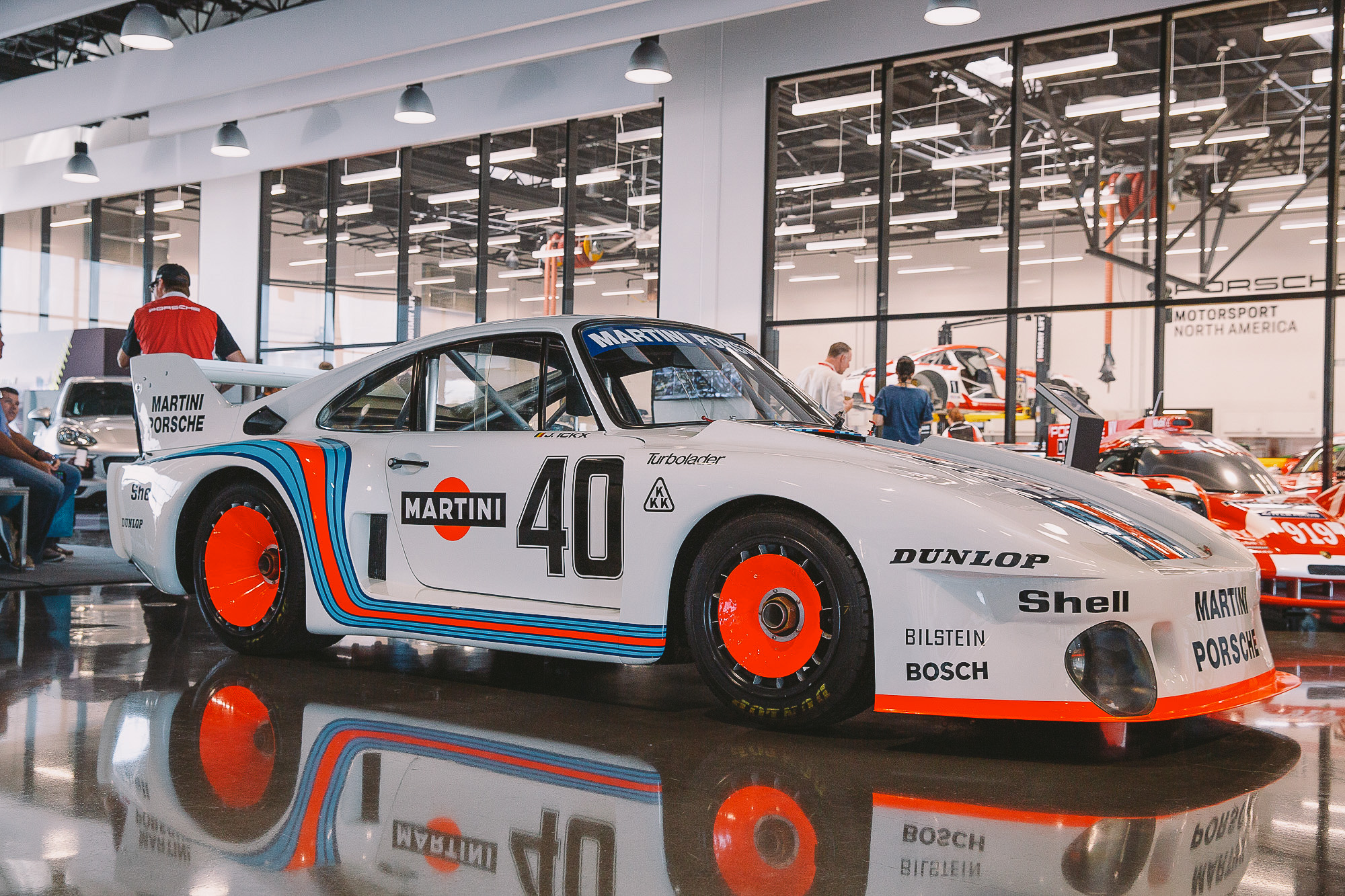 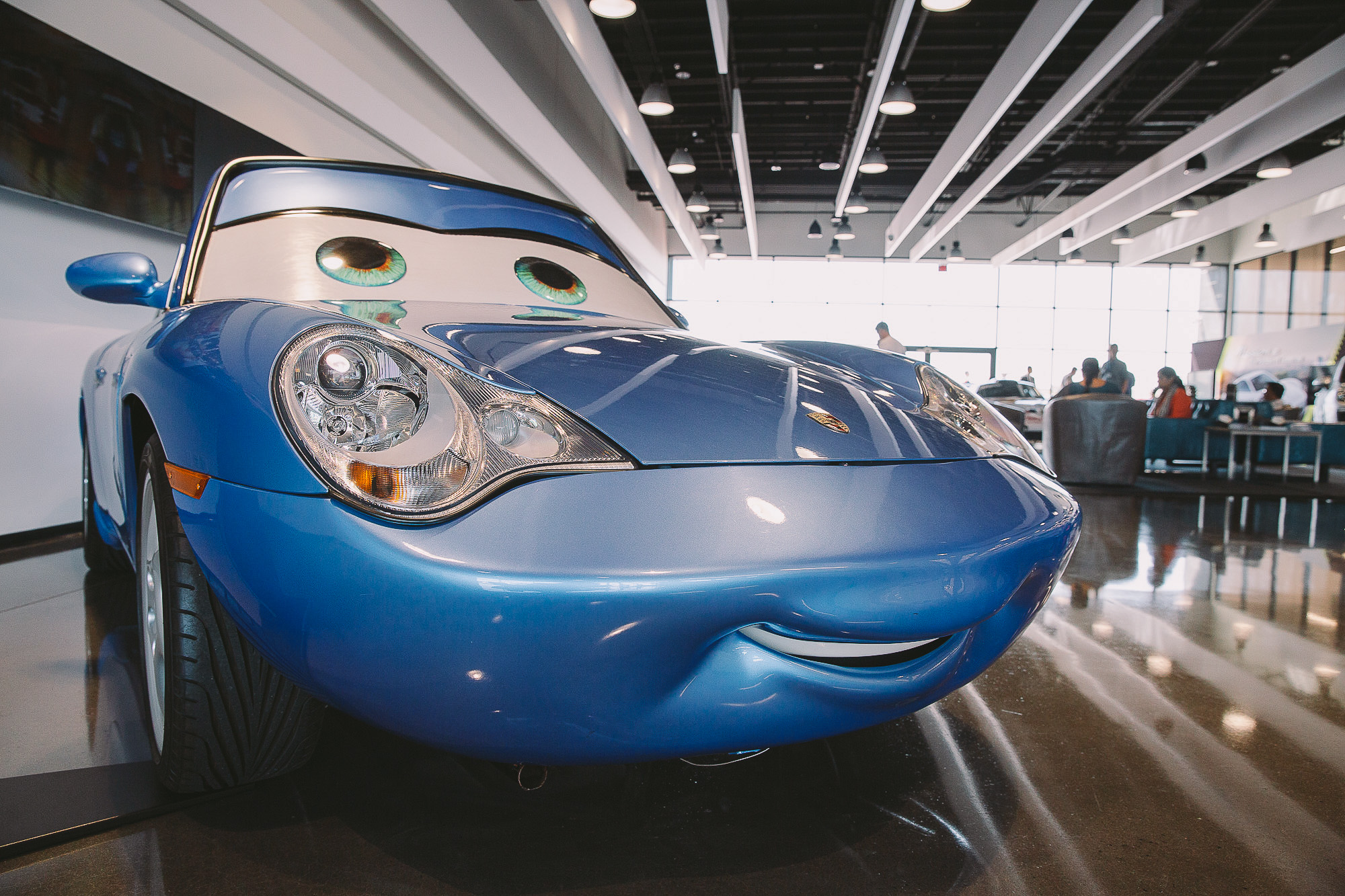 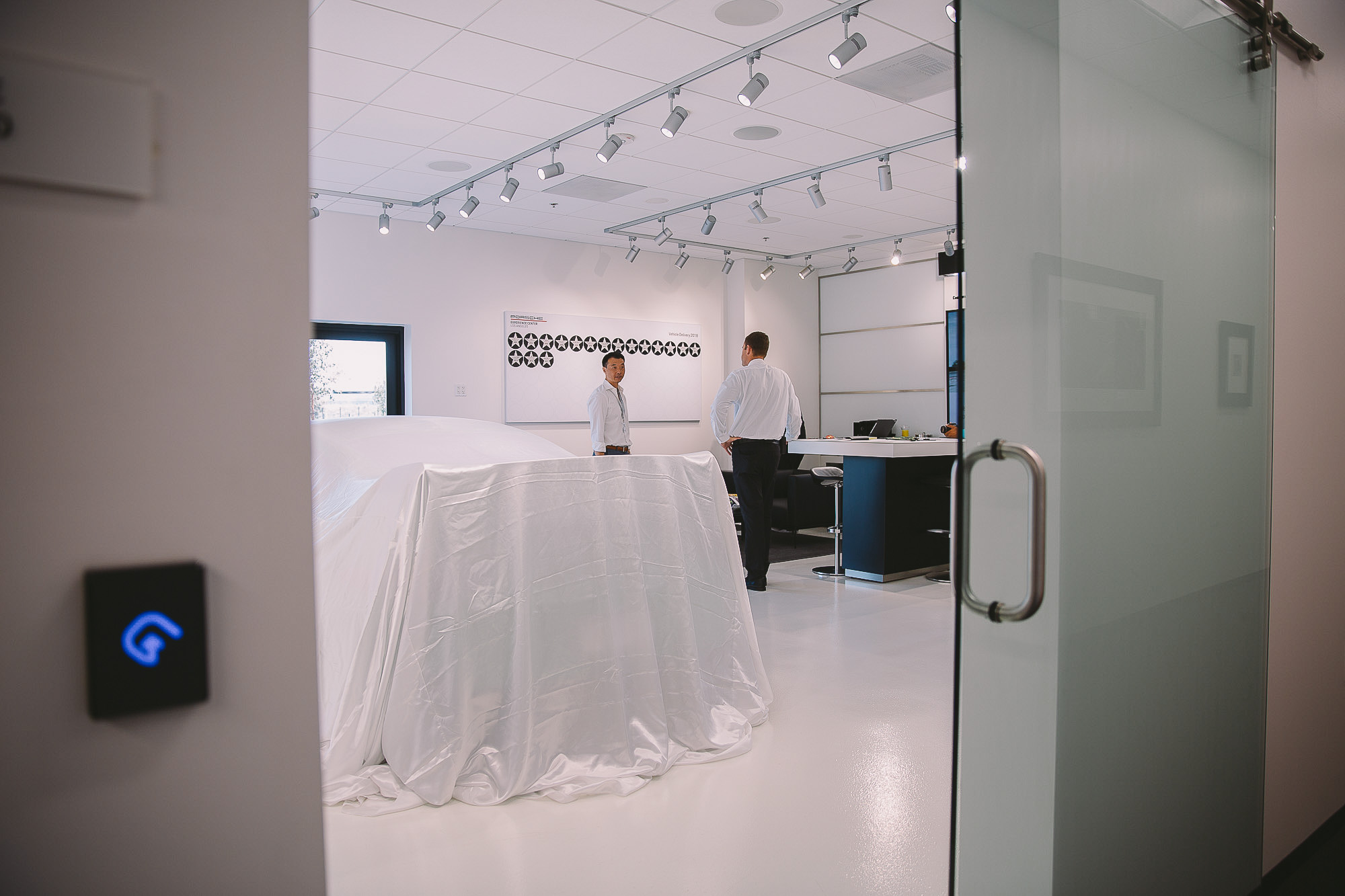 After getting in some hot laps in the new Panamera, we all headed into the showroom for the big unveil. Now Porsche has proven to me and basically everyone who was apart of this marvelous day that they are the ones to beat when it comes to bringing satisfaction to their customers. A handful of staff to make sure that your day goes without a hitch picking up your dream car that you custom built on Porsche’s website many months ago. Now there is a fee to get your delivery here at PECLA but I can assure you that it is worth every penny. 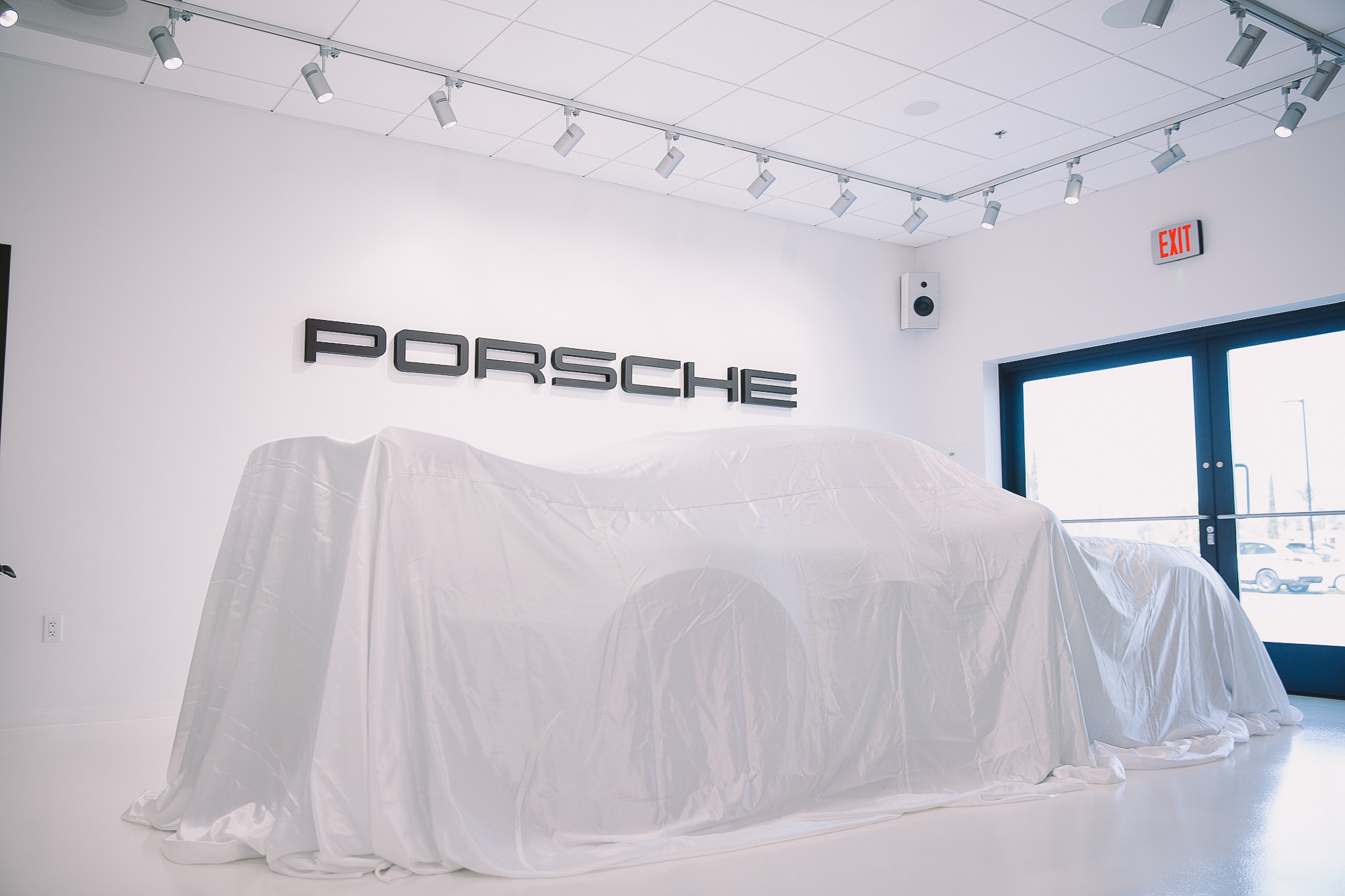 First off, included is a private session with your own trainor. In this case, Dieter was chosen by Verone because he says that Dieter is the very best! Verone spent the better half of the morning driving on the track in the beautiful 991.2 Chalk GT3. Must be nice sir, must be nice! Then when the guest started to arrive, Dieter took us for a ride along in the Panamera to showcase all of its safety features and I must add that the features are very impressive. 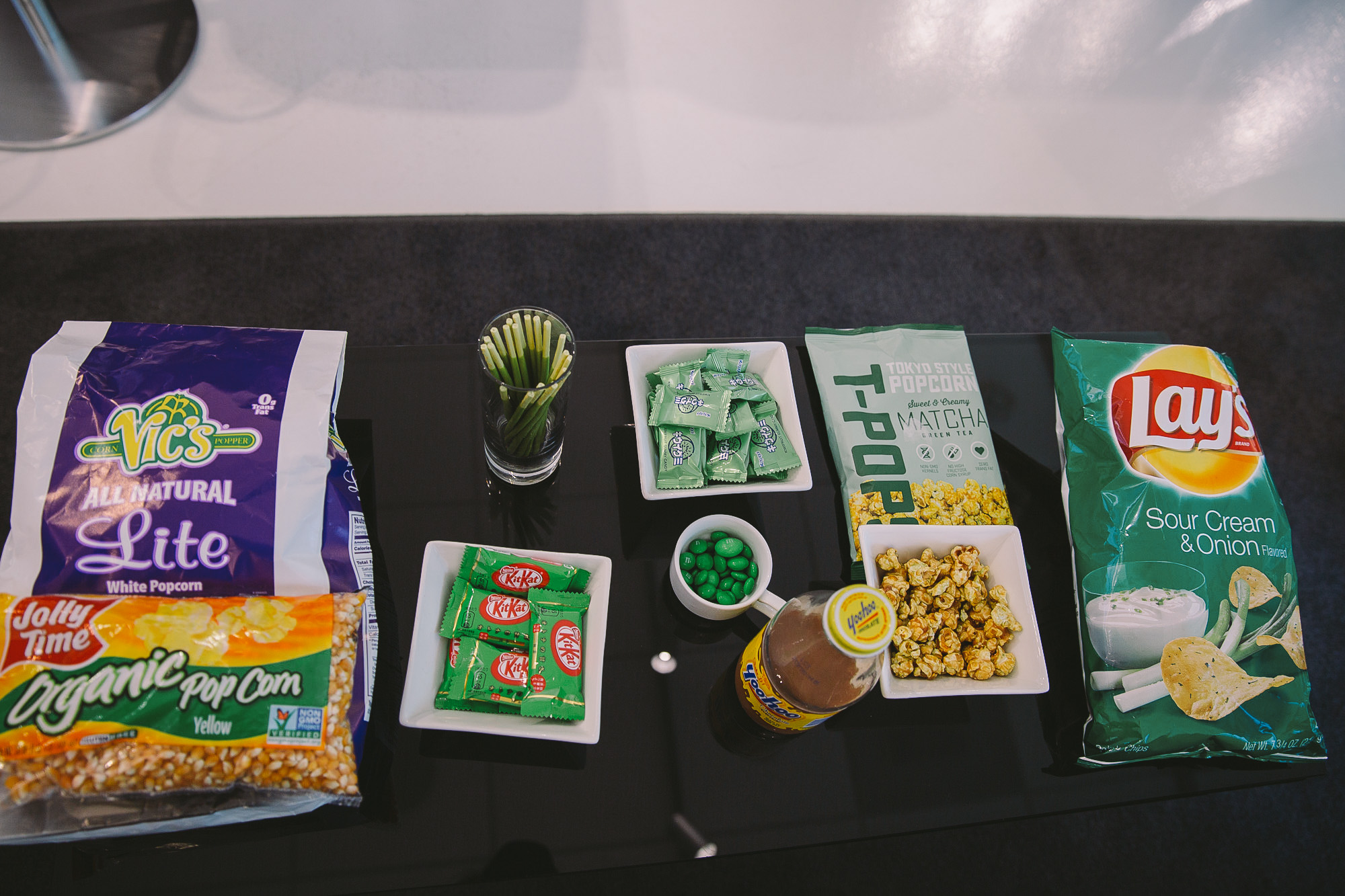 After getting some track, we headed back to the showroom for snacks and beverages that was so meticulous gathered by our host Charles. Now Charles makes sure that Verone leaves beyond happy with the purchase of his new prize and without a doubt, Charles delivered! His attention to detail was marvelous as he made sure that all of the things that Verone liked to snack on was present. Of course somehow all of things ended up being green. Coincidence? 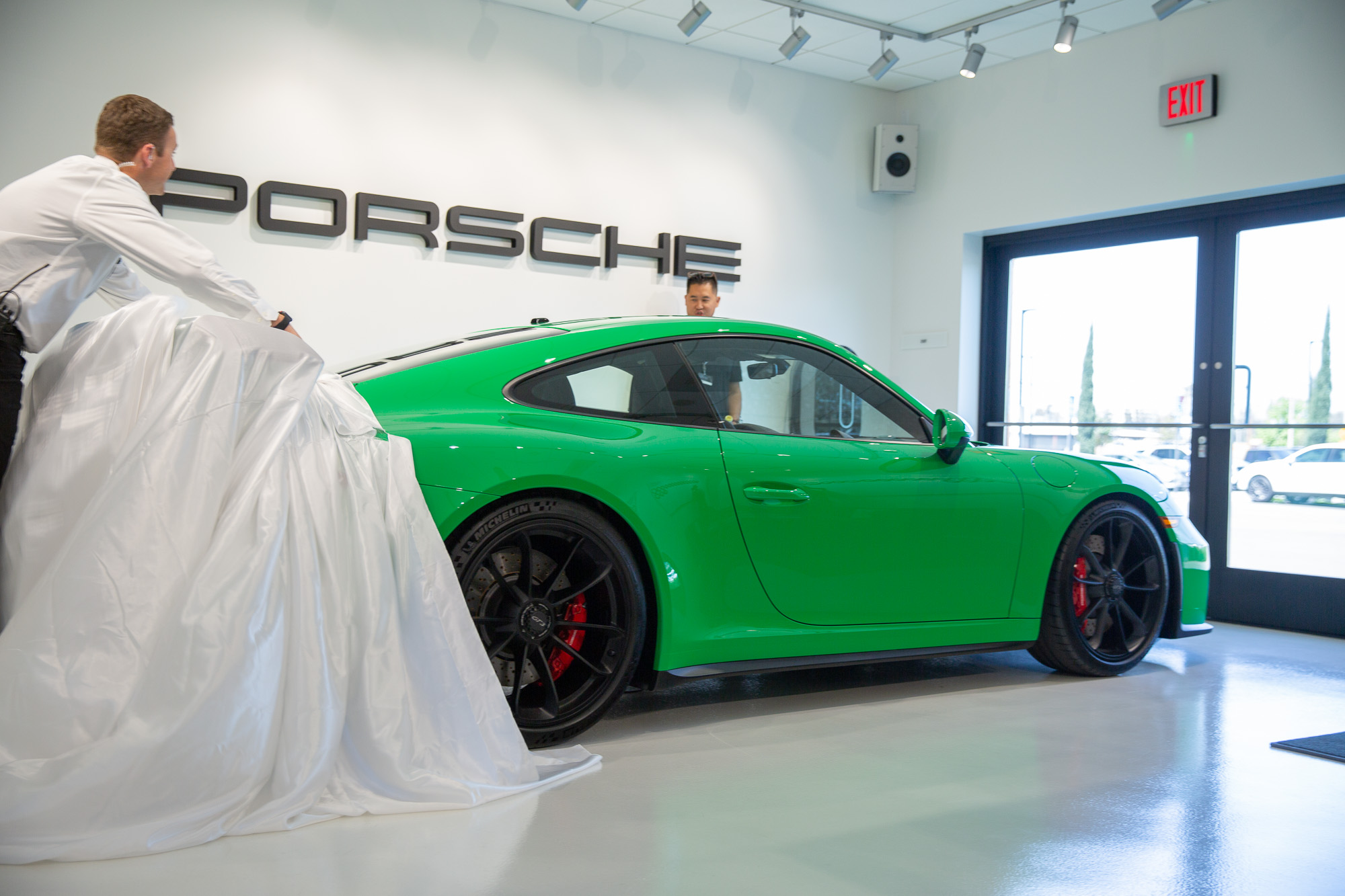 When it was finally time to unveil, Dieter and Charles worked hand in hand to make sure the magical moment was in sync with the music that was carefully choosen for the Mr. V as well. A well choreographed dance by the hosts and at the end of the tunnel, was this gorgeous green light to light the way. The new PTS Signal Green to grasp the attention of any nearby on looker. 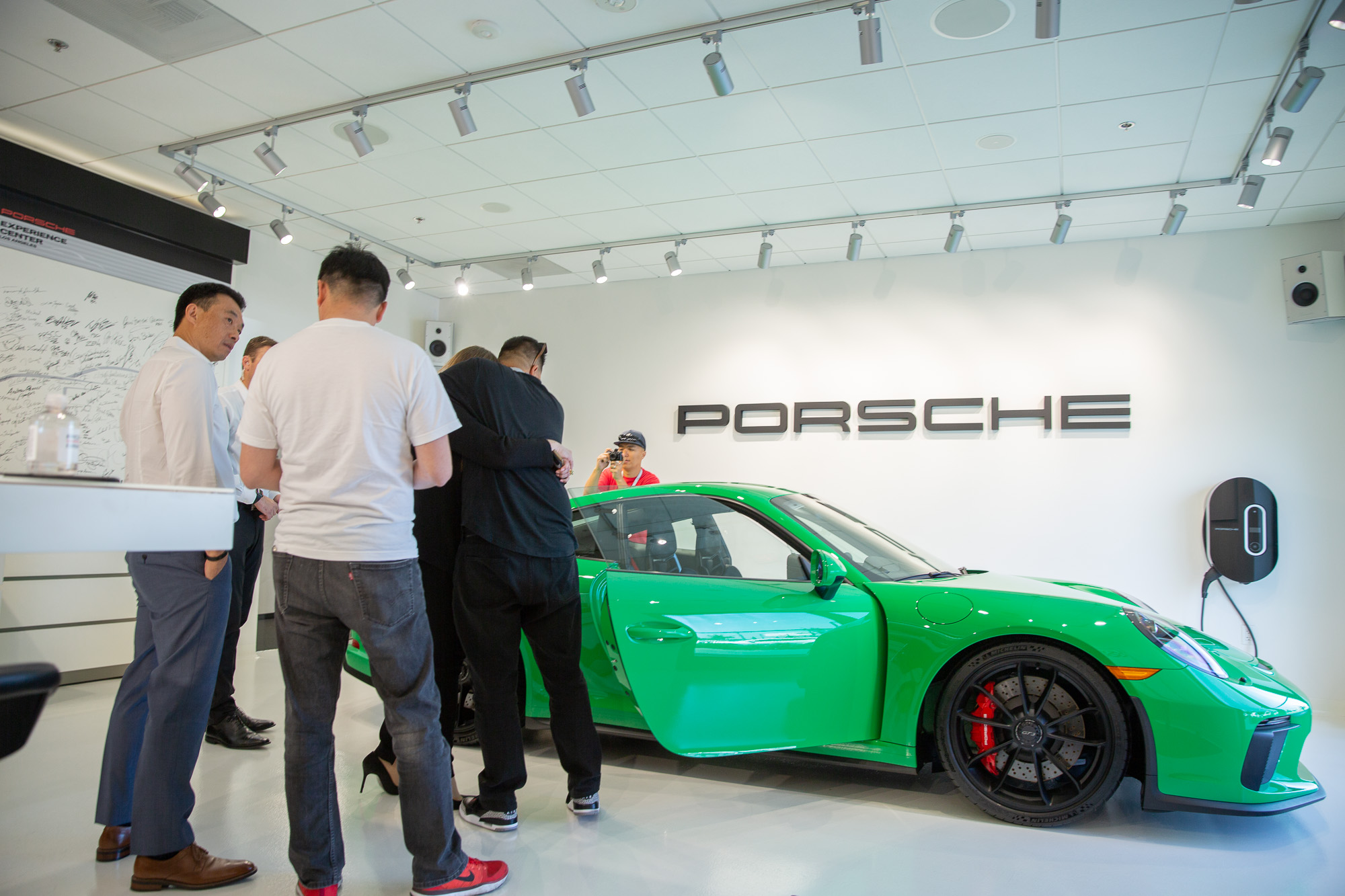 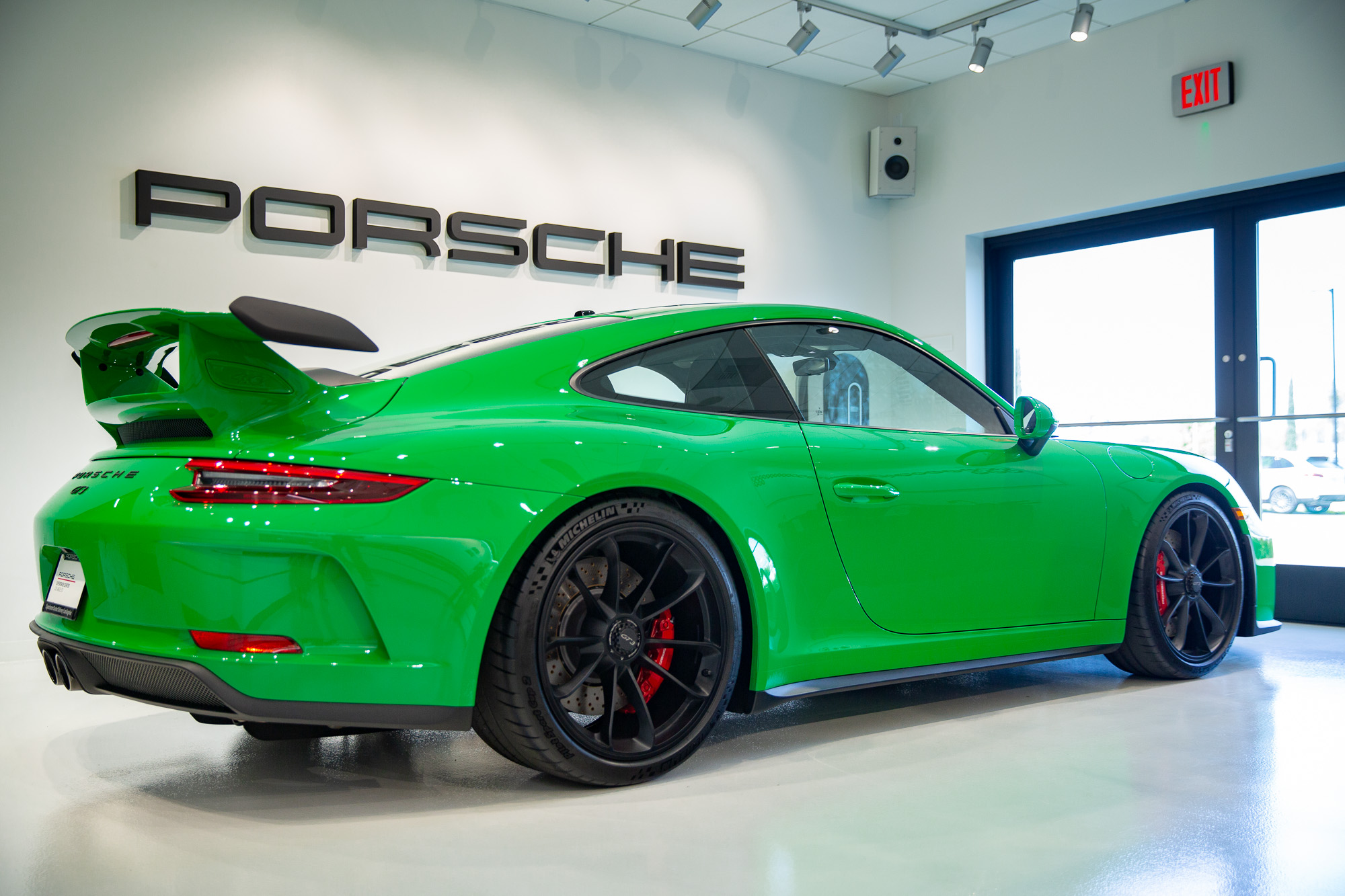 After all the happy tears came down everyone’s face, Verone signed his #18 to be mounted on the wall of stars for those to view who come after him. It was like signing your name into a very exclusive club of awesome car people owners. Must be nice to have such things. I wouldn’t know. lol. 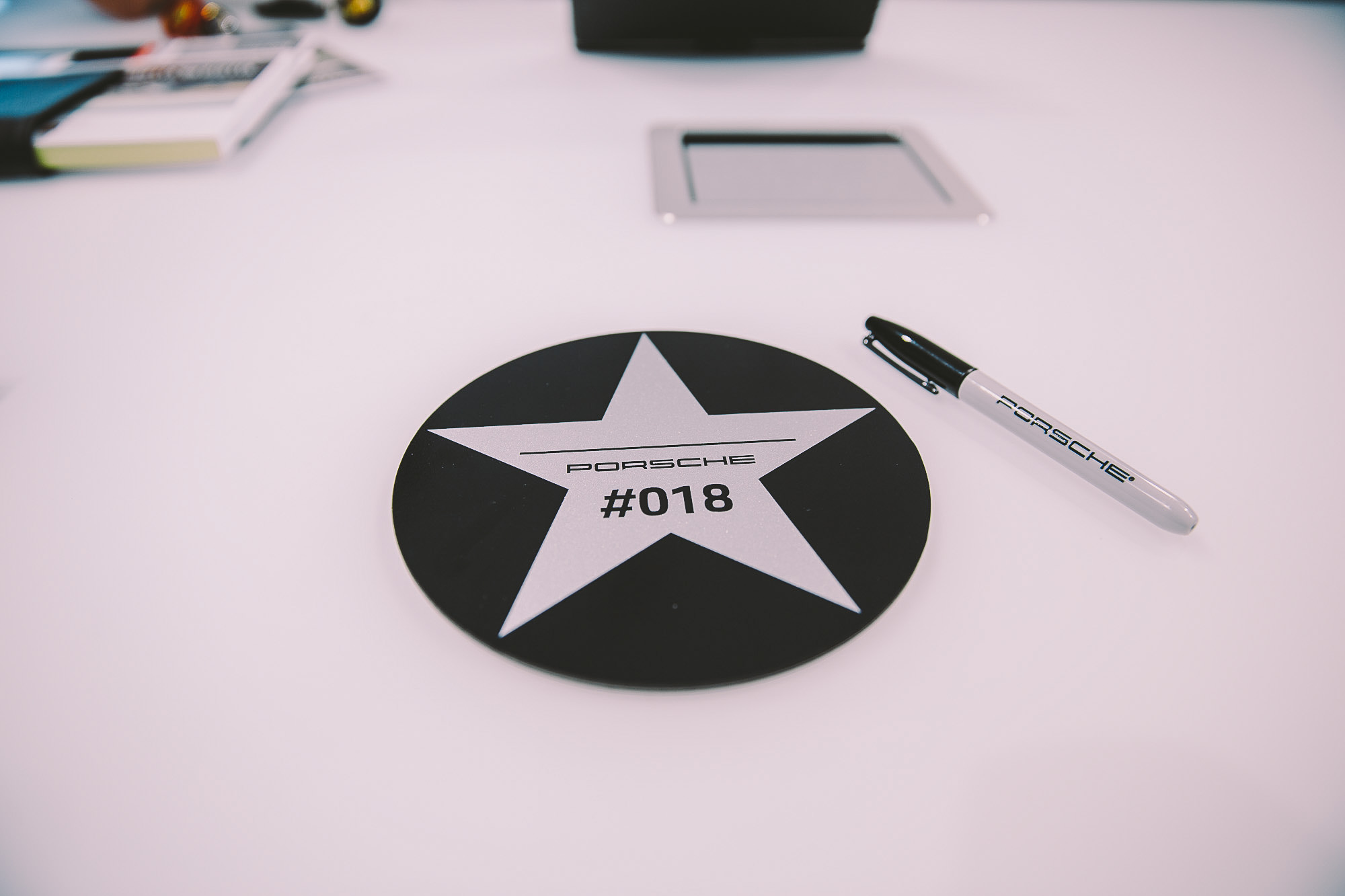 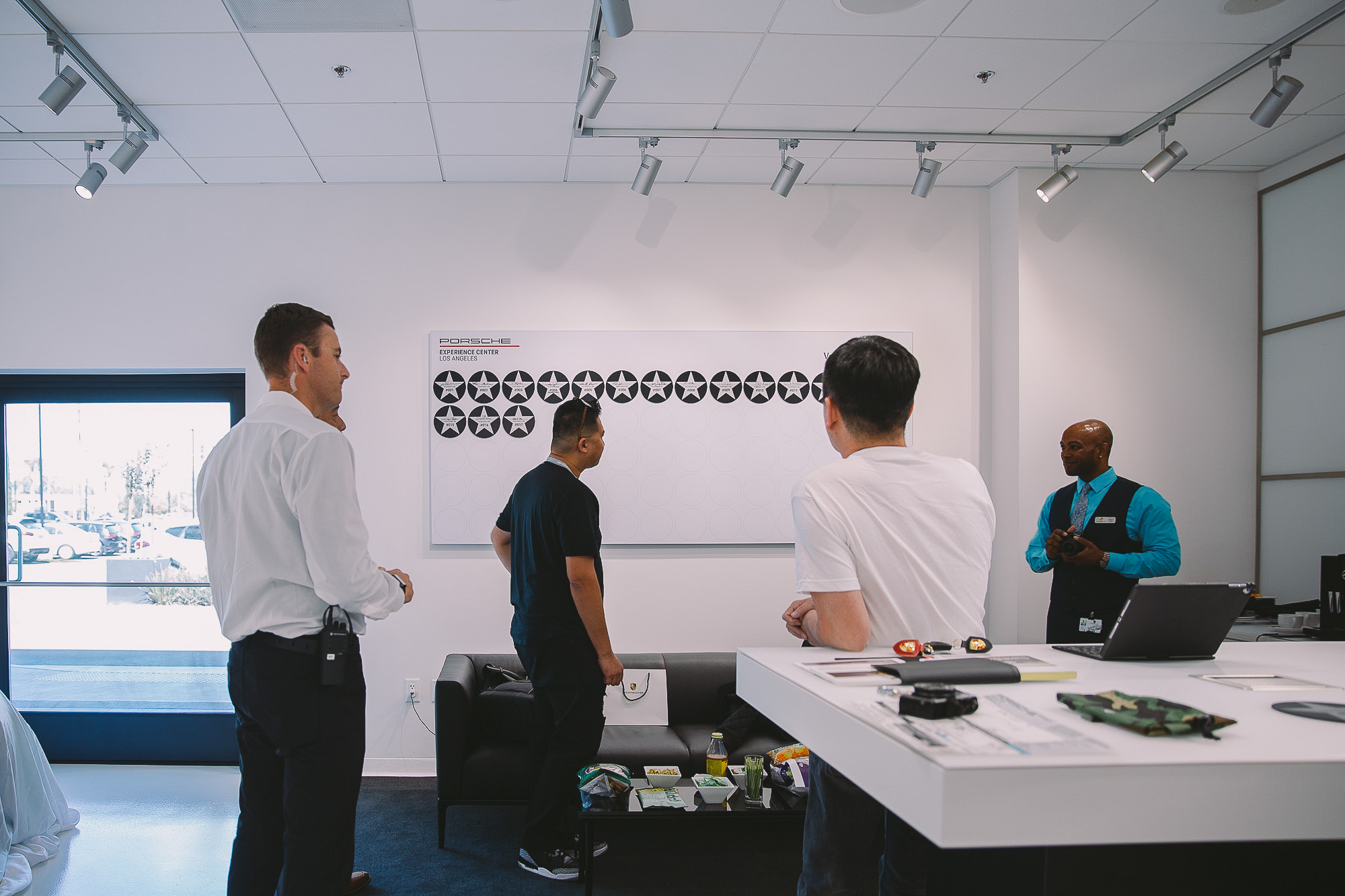 And of course, after all of that hard work, you begin to develop an appetite and what better way to celebrate than to eat at their famous 917 restaurant? Did I tell you that lunch was complementary? Yea for Verone and all of his guests. Life is grand when you got friends in high places, don’t you say? 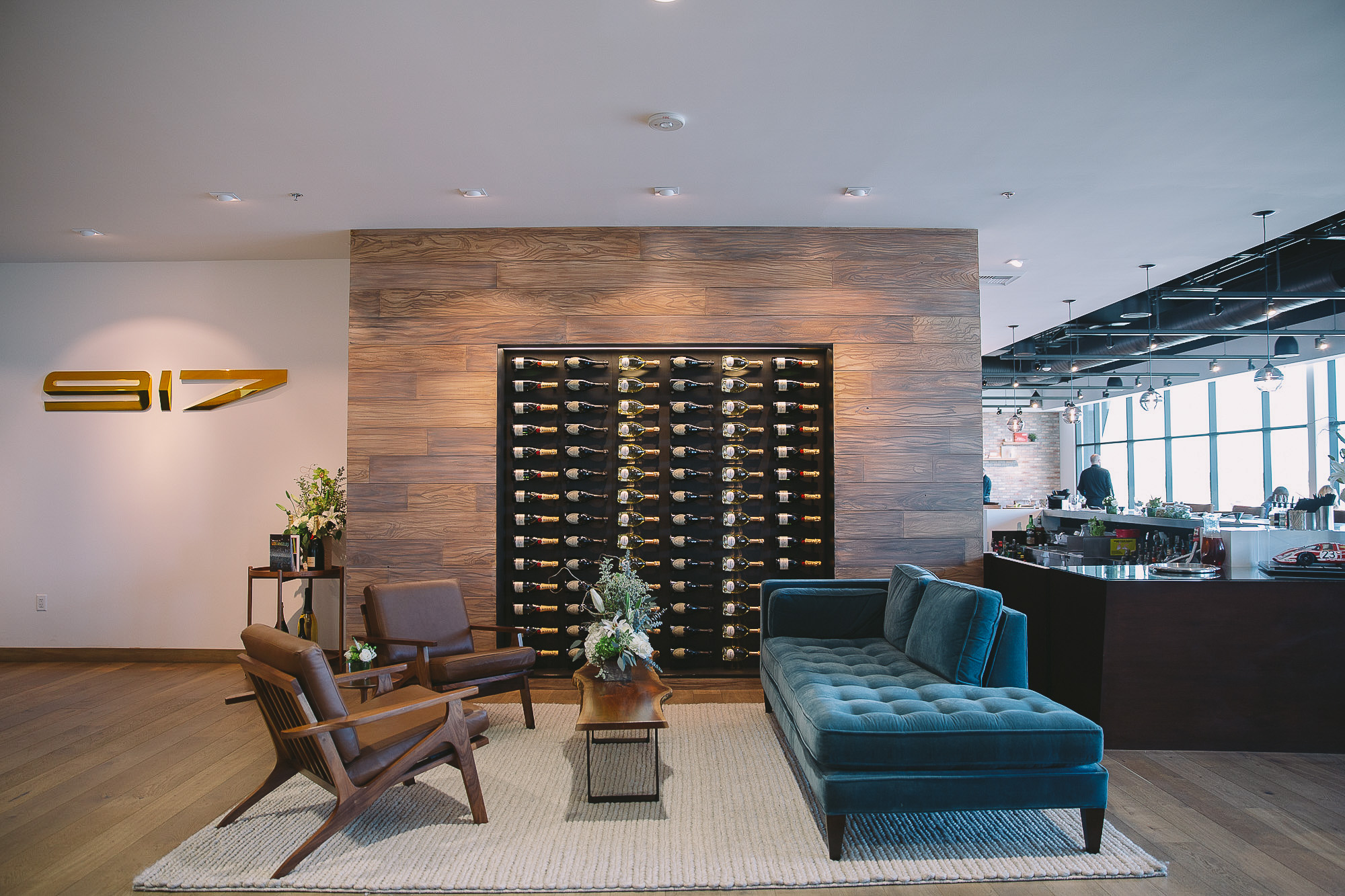 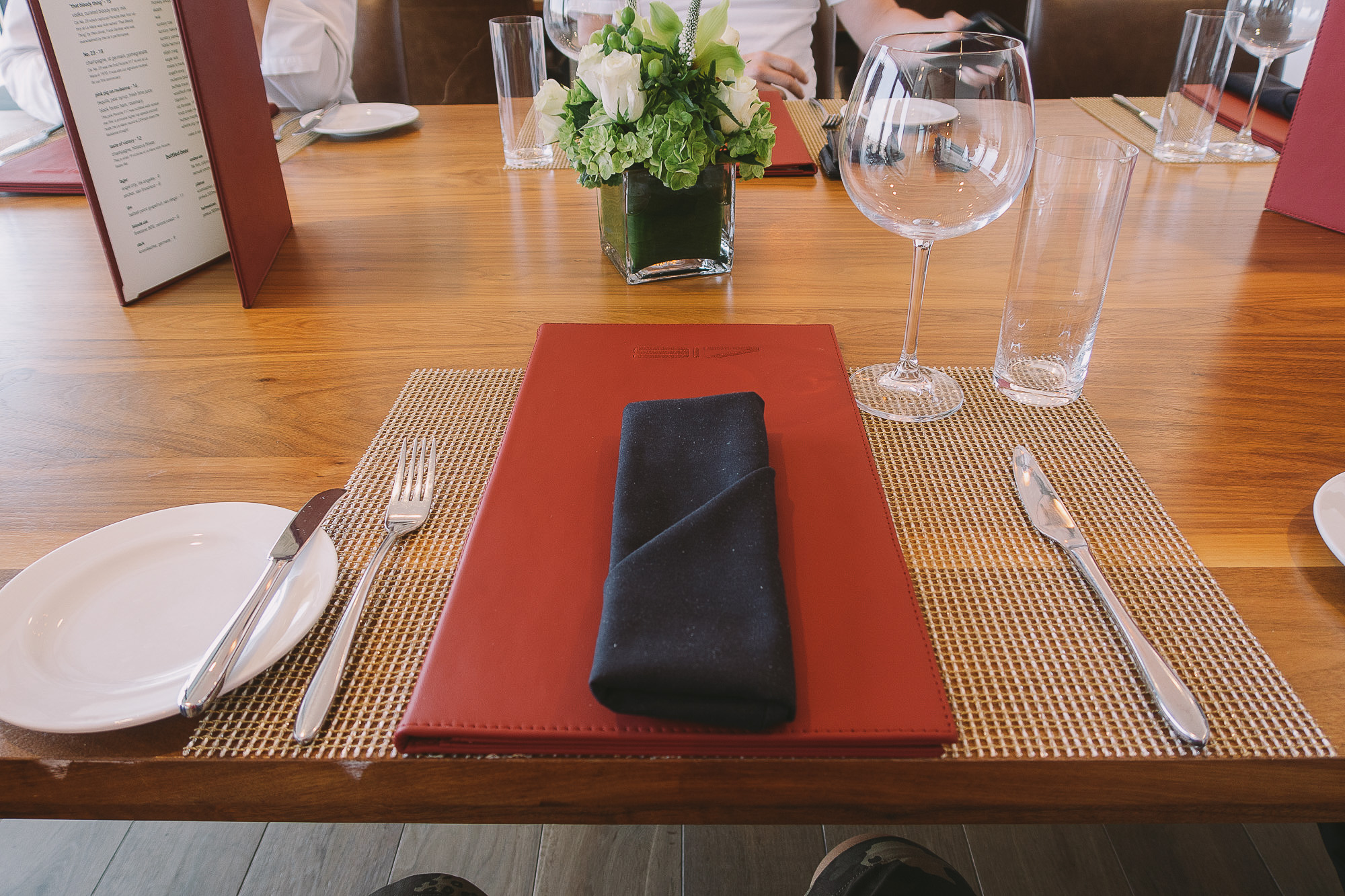 Look at this menu… the menu is made from the leather of all of Porsche’s interiors. Soft and supple, the leather is no doubt real and it smells amazing. I want this as a jacket, pillow and glove, just to name a few. The menu was filled with so wonderful delights, I wont’t get into all of it as the menu changes seasonally but let’s say you won’t be disappointed. 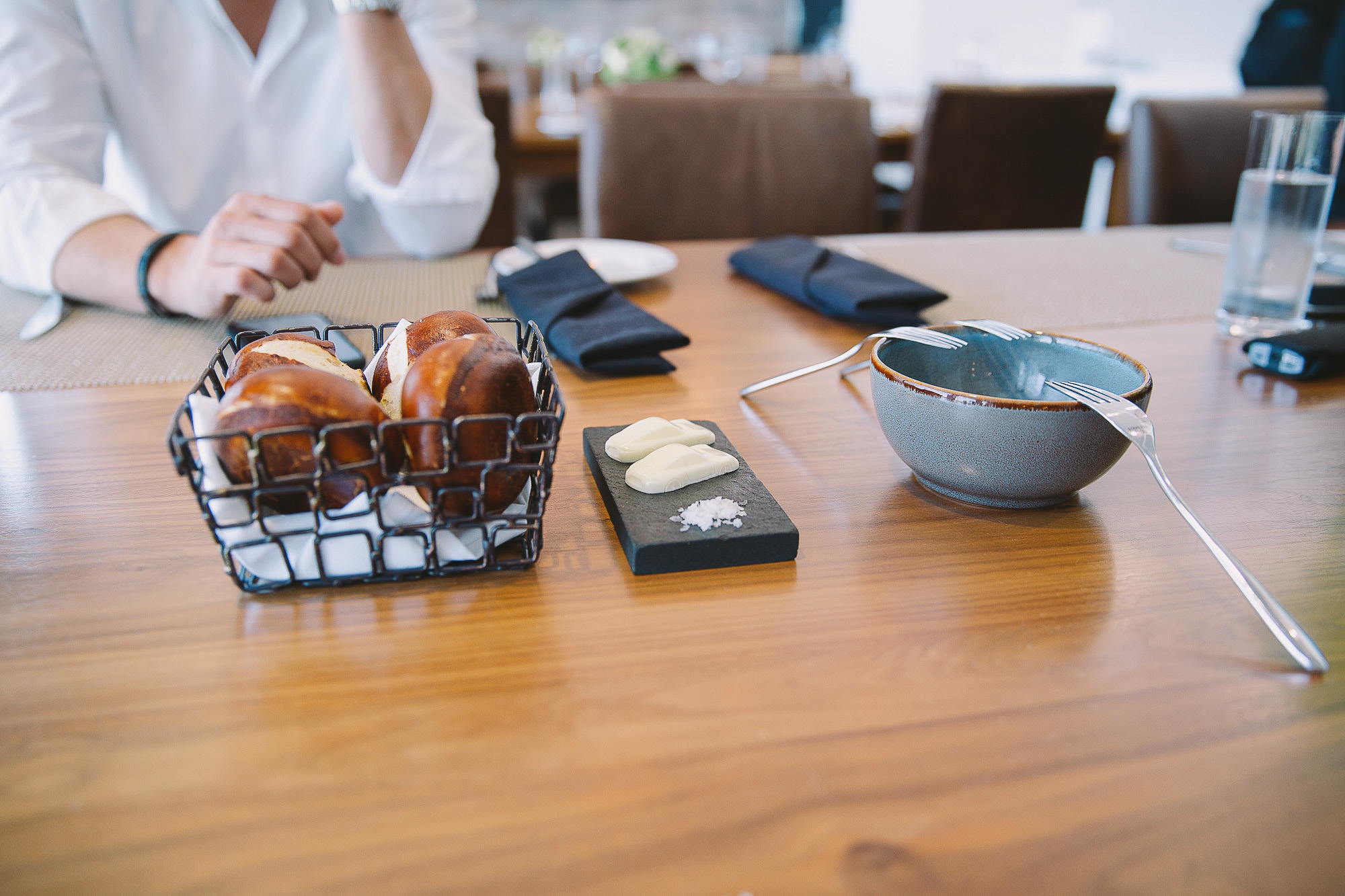 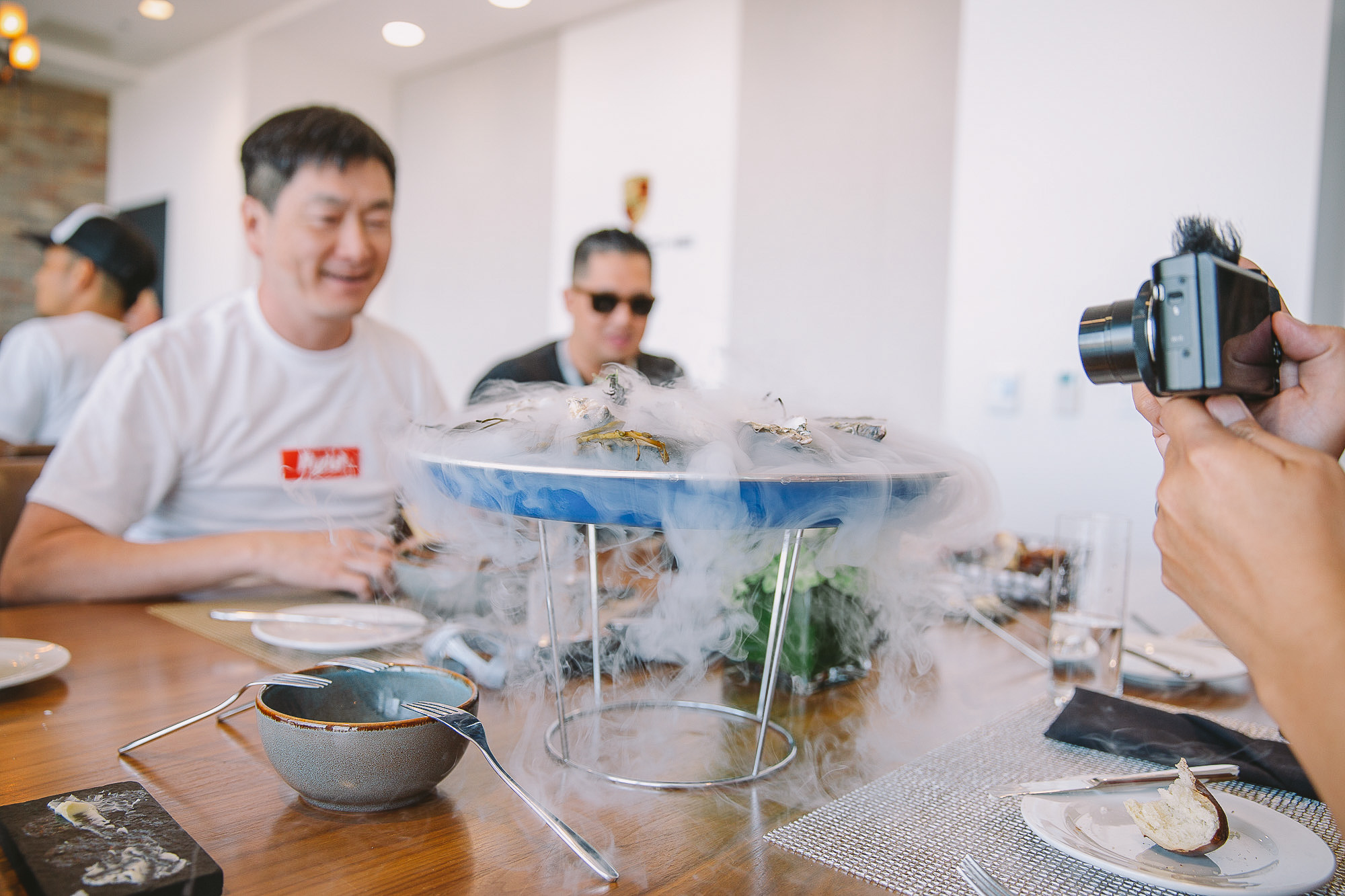 Oh by the way, if you are anything like Sean Lee and you like your Oysters, this is one great way to get presented with it.  A mist of fog and the chucked oysters on top of ocean seaweed and river rocks. I mean just look at the smile on Sean’s face. It says it all. 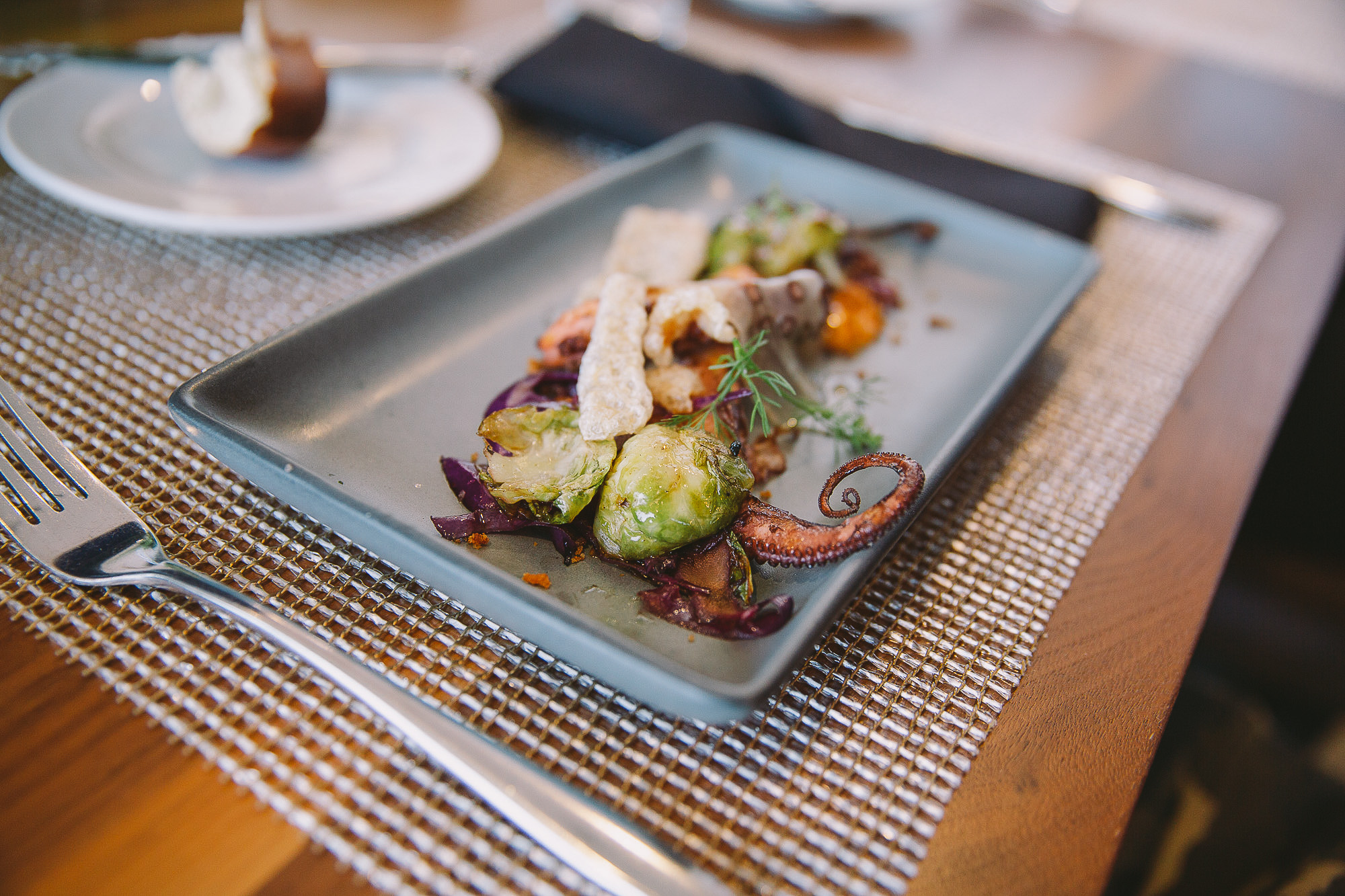 One of the awesome appetizers was this octopus accompanied by brussell sprouts, cabbage and chicharrón. The octopus is slowly cooked over 10 hours to give you that amazing tender meat that you are typically not used to. Fabulous dish to start the meal.

I will just leave it there because if I showed you anymore, you would just hate me even more. I was not able to get any footage of Verone driving off into the sunset because his GT3 was picked up and sent straight to get a clear bra before and pebble could think about taking a layer of paint off. Wonderful to be eating lunch with the big wigs above (pictured left to right Davie, Sean, Verone).

I hope you guys enjoyed this segment. If all things go right, I will be back to document a potential GT2 RS in the near future.